Santa's Ghetto: Murals and Grafitti against the Wall

I found this article (which appeared in the Arkansas Democrat-Gazettte on December 16) about the latest activity of Banksy and other artists around the Separation Barrier/Apartheid Wall to be quite interesting. The new project involves both the usual graffiti/art by foreign artists on the wall, as well as a "temporary gallery set up in a shuttered storefront on Manger Square, across from the Church of the Nativity where tradition says Christ was born." Items in the gallery are on sale, and proceeds go to benefit youth and children's programs in the West Bank. And, "One bidder in Santa’s Ghetto already has offered $ 125,000 for one of Banksy’s trademark rats with a slingshot that’s painted on a bent metal grate." 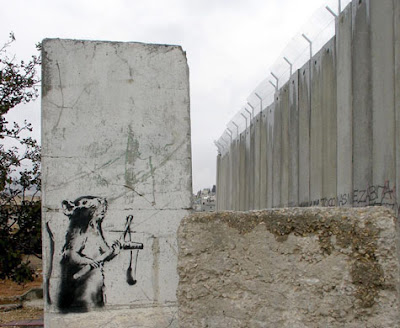 "Banksy’s initiative has sparked an interesting debate about artwork on the wall.

While some see the art as a form of political protest, others see it as a misguided attempt to transform the wall into something beautiful. 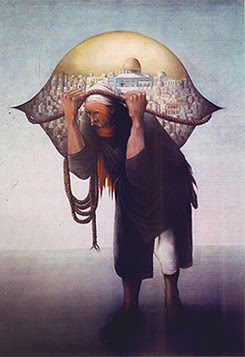 'I don’t think they should do work on the wall,' said celebrated Palestinian artist Suleiman Mansour. 'In some way, artists become attached to their work and won’t want the wall to come down.' Still, Mansour has contributed to the Santa’s Ghetto gallery — a new version of his famous painting showing an elderly farmer carrying the Old City of Jerusalem on his back. The original was purchased in 1973 by Libyan leader Moammar Gadhafi and was destroyed when U. S. jet fighters bombed Tripoli in 1986 in retaliation for the bombing of a German disco that killed an American soldier."

I recently participated in a panel at the American Anthropological Association, serving as a discussant, and one of the papers, by Amahl Bishara, dealt precisely with this issue. She argued that whereas artists and delegations visiting Palestine to express their opposition to the wall have gained a lot of publicity for the graffiti/art they've put on it, Palestinians tend to have a very different relation to the wall, which is not often heard. In general, they'd rather that the wall NOT be decorated, or artistically "defigured," but torn down. (I'm simplifying a rather more nuanced argument, but that was one of Bishara's important points.) Finally, this position has now received some publicity. (And in my local newspaper.)

Here's an article about Banksy's latest intervention from the BBC, and one from The Guardian. Photos of Banksy's earlier Wall grafitti here.
Posted by Ted Swedenburg at 10:40 PM