Gayhane: Gay disco in Berlin for Turks and Arabs

Nicholas Kulish reports, in an NYT article entitled "Gay Muslims Pack a Dance Floor of Their Own," on a monthly event known as "Gayhane" at a Berlin disco. But why give the article the title, "Gay Muslims"? No doubt many of those who participate consider themselves Turks or or Kurds Arabs or Turkish-Germans or Berliners?

The monthly club is organized by the transgendered Fatma Souad (pictured), who started throwing the events in 1997. What's the music? Amr Diab and Cheb Mami are popular. One of the dj's, Ipek Ipekcioglu, "spins everything from Turkish and Arabic music, to Greek, Balkan and Indian, a style she calls Eklektik BerlinIstan." 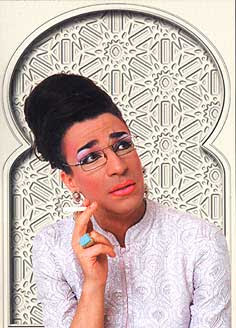 The article leaves the unfortunate impression, however, that the young men and women who participate in Gayhane ("hane" means home in Turkish) would be "killed" if their families knew, but it also shows that homophobia isn't just a phenomenon peculiar to Middle Eastern communities in Germany. "[H]omophobia is also higher among Russian immigrants and in other, less urban parts of Germany," according to social psychologist Bernd Simon.

Gayhane of course is not a "new" phenomenon. Please check out this article from 2004, from AFP, whose title is "Gay Turks [as opposed to "Muslims"] Tearing Down Walls in Berlin," and which usefully discusses racism within the German gay community.
Posted by Ted Swedenburg at 9:38 AM