I sooooo love this photo by Thomas Abercrombie from the April 1958 issue of National Geographic, and featured as "photo of the day" on the National Geographic website on August 23, 2013. (For a somewhat clearer view of the photo, click on the link.) 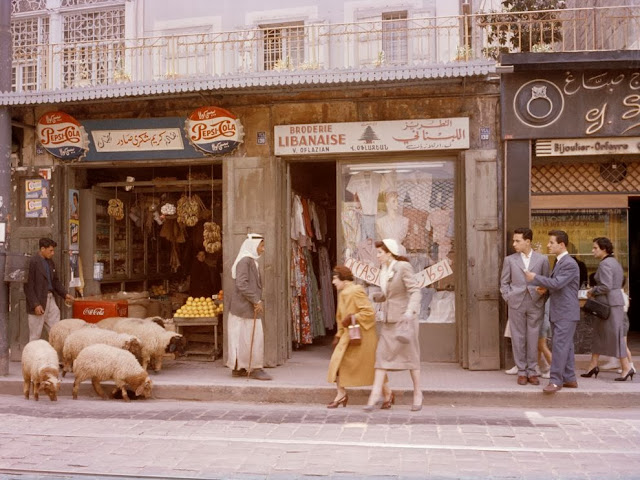 It is from story by Abercrombie about "Young-old Lebanon," and its caption read, in part: "For variety, few cities can match Lebanon's bustling capital. Part Christian, part Moslem, Beirut combines East and West, ancient and modern. Contrasts stand out vividly in street scenes such as this on the Rue Georges Picot. … A sign over the blouse shop shows the cedar, Lebanon's national symbol. The market-bound shepherd in Near Eastern headdress and Western jacket icily ignores the latest European fashions."

I don't love the photo precisely for the reasons enumerated in the caption, although that is part of it. I think to make sense of the photo, it is better to jettison the notion that it juxtaposes East and West and ancient and modern. Rather, this is just a guy from the countryside who has brought his herd to the city to sell to a butcher. His clothes, like those of the others in the photo, are machine-made, from head to toe, he is probably wearing a wristwatch, and he is just as likely to drink the Coca-Cola sold in the grocery store (baqqala) pictured on the left as the more modern others in the photo. But he is probably ignoring them, as they no doubt feel themselves more urbane and sophisticated and superior to the lowly herder.

As someone who lived in Beirut between 1964 and 1976, and who made my first visit there in 1961, the scene is very familiar to me, and it captures so much. The "baqqala" is a typical one, selling not just Coca-Cola but Chiclets and Fab detergent (there are signs for these) as well as bananas and eggs and oranges and grapefruit (all very fresh), and really, everything you need. Next door is an embroidery (broderie in French, tatriz in Arabic) shop owned by an Armenian (V. Oflazian), with its sign in French, Armenian and Arabic, and the the cedar tree. It is having a sale, indicated by the "Occasion" sign (in French and Arabic) that is partially obscured by the two chicly dressed women. The two young men are very smartly turned out as well.

Note as well the tram line. During the first couple years I lived in Beirut, we often used to ride the tram from West Beirut (Bliss Street) to downtown. Rue Georges-Picot (named after French diplomat François Georges-Picot, one of the infamous authors of the Sykes-Picot Agreement) was the west extension of Rue Weygand (named after the French commander Maxime Weygand). Just a ways further along west from here is Wadi Jamil, Beirut's Jewish quarter. When I lived there, of course, street names, except for a few, were not used all that commonly, and we just knew this area as Bab Idris. It's hard for me to tell, it may be known now as Omar Daouk Street.

Here's a bit of a map to show where it is (you can read George Picot right below the Normandy Hotel). You can see the entire map, produced by the US Army Corps of Engineers Map Service in 1961, here, courtesy of the University of Texas Perry-Castaneda Library. 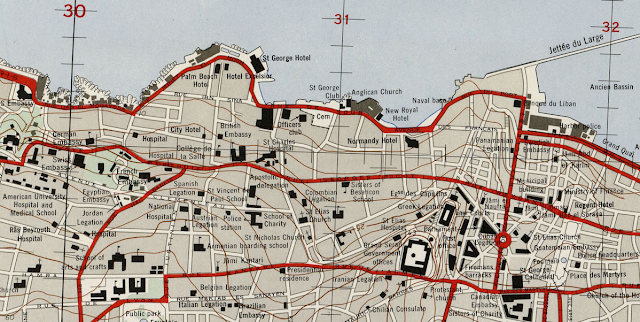 Here are a couple older photos of Rue Georges-Picot, this one from 1920 (and perhaps before it was even called Georges-Picot), looking west. The tram line is in evidence (it dates from 1908, put in by the Ottomans.) 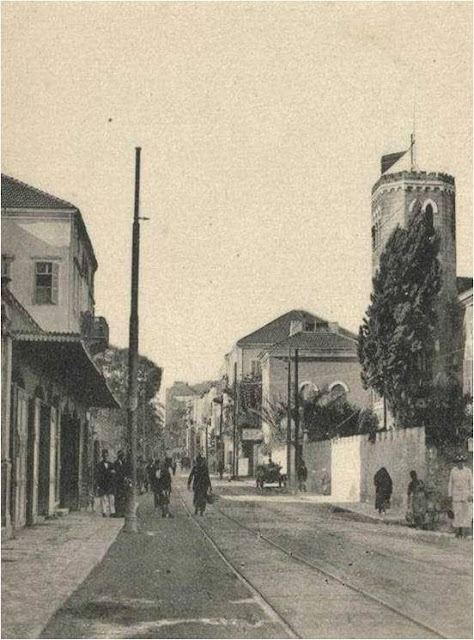 And another, looking east I think, and somewhat later than 1920. And this one is from the late sixties or early seventies. It's labeled as Rue Weygand, and that is where it is taken from, but just up the street it becomes Georges-Picot. It's a scan of a postcard my grandmother Claudia purchased when she visited Beirut in 1972. 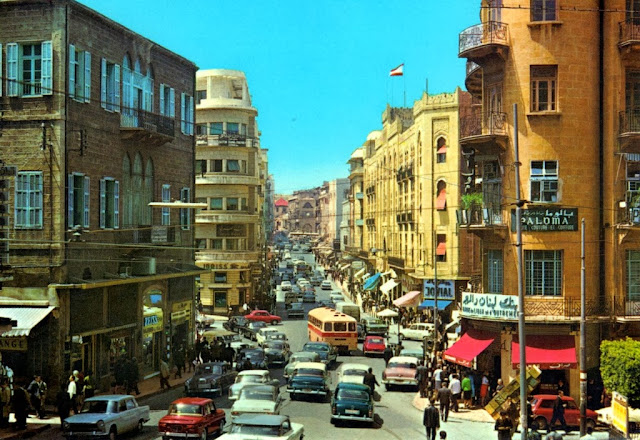 Note the bus: these replaced the trams in 1965. They were faster and cleaner but the trams were way more fun. 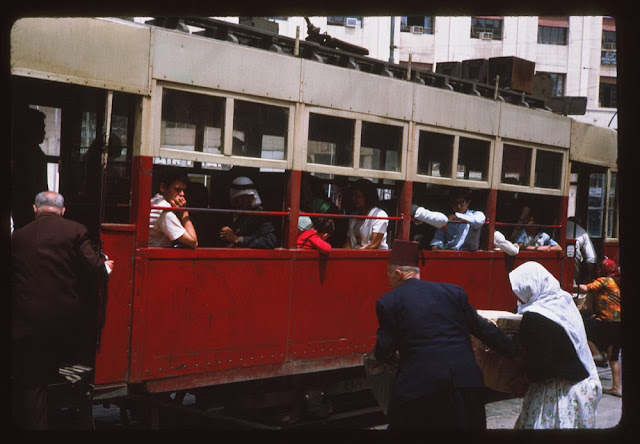