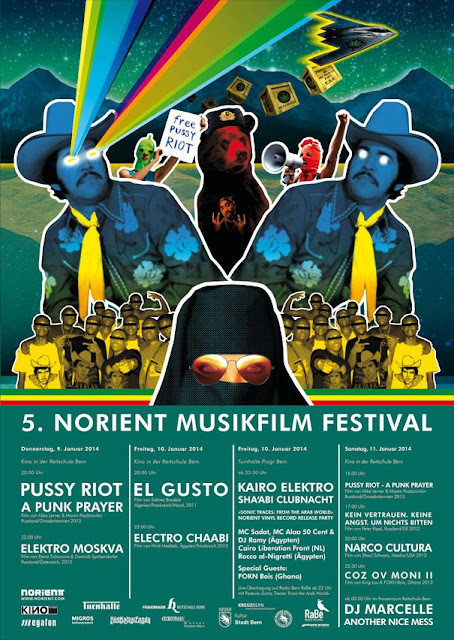 I was asked to write the program notes on electro sha'abi (better known in Egypt as mahragan) for the 2014 Norient Musikfilm Festival, and they were just published today. You can read them here in English, and for the first time, something I wrote has also been translated into German, which you can read here.

The Festival program is very exciting, and I really wish I could attend. (But there is that cash flow problem...).

On the mahragan/electro sha'abi front, the festival features a very fine documentary on the mahragan scene, Hind Meddeb's Electro Chaabi. Here's a trailer:

The festival will also screen the terrific film about Algerian shaabi (very very different from Egypt's electro shaabi!) and the recent reunion and tour of Jewish and Muslim shaabi musicians, El Gusto.

Plus films about Pussy Riot and the cultural scene around Mexico's narcotraficantes.

If you are anywhere near Bern you should go!
Posted by Ted Swedenburg at 10:24 PM