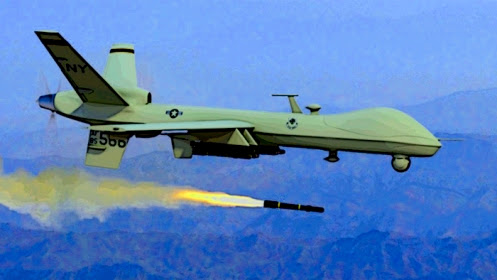 One of my New Year's wishes for 2014 is that the USA end its bloody program of targeted assassination.

The invaluable blog Dangerous Minds (which mostly posts about pop culture) yesterday posted a piece entitled "The Truth about Obama's Indiscriminate and Bloody Drone War." It featured excerpts from Greg Palast's Vice article (July), "Drone Rangers," and a more recent article (December 29) from The Guardian by Heather Linebaugh, who served in the US Air Force from 2009 until March 2012, working in intelligence as an imagery analyst and geo-spatial analyst for the Iraq and the Afghanistan drone program.

I found these excerpts from Linebaugh's piece to be most illuminating. I wish everyone in the USA could be made aware of this.

What the public needs to understand is that the video provided by a drone is not usually clear enough to detect someone carrying a weapon, even on a crystal-clear day with limited cloud and perfect light. This makes it incredibly difficult for the best analysts to identify if someone has weapons for sure. One example comes to mind: "The feed is so pixelated, what if it's a shovel, and not a weapon?" I felt this confusion constantly, as did my fellow UAV analysts. We always wonder if we killed the right people, if we endangered the wrong people, if we destroyed an innocent civilian's life all because of a bad image or angle...

The UAVs in the Middle East are used as a weapon, not as protection, and as long as our public remains ignorant to this, this serious threat to the sanctity of human life – at home and abroad – will continue.
Posted by Ted Swedenburg at 2:29 PM