The iconic cartoonist R. Crumb is well-known as a collector of 78s, many of which he has picked up during his residence in southern France, where he has lived since 1993. (He owns around 5,000 of them.)

He has appeared a number of times over the last year on John's Old Time Radio Show, most recently to play a number of 78s in his collection recorded by North African musicians.

It's really an amazing show, and the music quite remarkable. I was quite surprised at how good those old 78 rpms sounded. I highly recommend that you download the podcast and listen repeatedly.

Some of the artists on the session are quite well known, such as the Jewish-Arab singer Habiba Msika from Tunisia, about whom I recently posted. (Unfortunately, the track is not identified, presumably because the title is written in Arabic on the album label. I urge you to post a comment, asking that R. Crumb post photos of the labels of the songs in question, so that those of us who read Arabic can identify the songs.)

There is the great Morrocan singer Hocine Slaoui, who recorded the famous song “Dakhlau Al-Merikani” (The Coming of the Americans), a comment on the arrival of Allied Troops in North Africa in 1942. It includes the recurring refrain in English, “All I hear is ‘Ok, Ok. C’mon. Bye-bye.’” (It's also known as "El Marikan Ain Zerka" (The American with the blue eye)). Check it out here.

And there is the celebrated violinist Sami Shawa, who was born in Syria but whose career was in Cairo, who was known both for his solo recordings (here is his "Taqsim Hijaz") and also for his work with great singers like Umm Kalthoum.

And according to JewishMorocco, there are two other Tunisian Jewish singers on the set, besides Habiba Msika: Fritna Darmon (here's another track from her) and Asher Mizrahi.

The rest of the artists, I've been unable to track down any information about.

R. Crumb put out a collection in 2003 called Hot Women: Women Singers from the Torrid Regions of the World, with tracks culled from his 78s collection. (He airs his rather antediluvian geographical theories about what produces "hot" music on the radio show as well.) 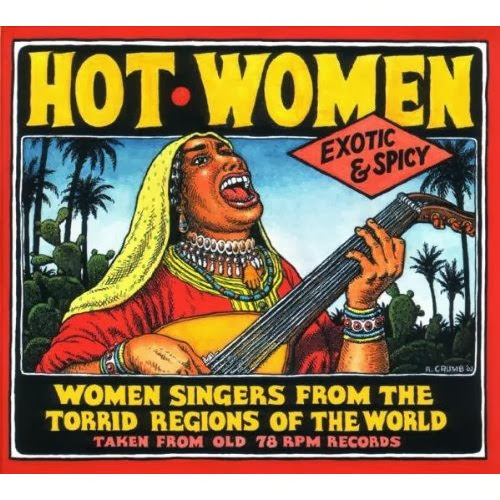 It contains three tracks from North Africa: (1) "Guenene Tini" by Cheikha Tetma (1930). Cheikha Tetma was a singer and 'ud player from Tlemcen, Algeria, who performed in the hawzi genre, the brand of Andalusian music specific to Tlemcen. Listen here. (2) "Khraïfi" by Aïcha Relizania (1938): listen here). I know nothing about her, but the name indicates that she was from Rélizane (Arabic, Ghalīzān), a village of European colonizers in the Oran region of Algeria. It's the same town that rai star Cheikha Rimitti (who originally recorded as Cheikha Remitti Relizania) grew up in. (3) "Yama N'Chauf Haja Tegennen" by Julie Marsellaise (1929). Again, I have no information about her, other than that she is from Tunisia, and I've not yet heard the song in question, but here's another recording by her, "Ya Helaouet el-Clap." (The video for that song shows the record in question, and it appears that her full name might be Julie Marsellaise Mahieddine.)

[Correction added December 9, 2013, thanks to Chris Silver (see comments below). Julie Marsellaise should be spelled Marseillaise -- the misspelling is from the Crumb collection, and is no doubt what is written on the record label. She got her name (and is also known as Julie La Marseillaise) from a stint she did at the Alcazar Theater in Marseille. No surprise, there was lots of cultural traffic, then and now, between North Africa and France. Julie's family name was Abitbol, and her daughter Ninette Abitbol was married in 1941 to the great Tunisian singer, oudist, and composer, Hédi Jouini. Ninette was a singer and dancer in her own right, who took the stage name of Widad. (Jouini, born Hédi Belhassine, has been called the "Frank Sinatra" of the Arab World, and his granddaughter Claire Belhassine has recently made a film about him called "Papa Hedi.")

The "Mahieddine" that I saw on the Julie Marseillaise record label refers to the great Algerian singer and actor Mahieddine Bachetarzi, who also managed many acts.]

Let's pray that another collection, devoted to music of North Africa, is forthcoming. It would be great if an expert on North African music could be hired to work on the notes!
Posted by Ted Swedenburg at 9:16 PM

Great post, Ted. Julie Marseillaise (real last name: Abitbol) was the mother of Ninette Abitbol who eventually married Hedi Jouini! Julie Marseillaise was, of course, Jewish and got her name from her stint performing at the Alcazar in Marseille.

Oh and the Mahieddine is Mahieddine Bachetarzi. He managed many of these musicians.