Today's (December 15) New York Times featured this photo (in both the print and the online versions) from Jehane Noujaim's very well-received documentary on the Egyptian uprising of January-February 2011, The Square ("Al Midan"), and its complicated. (From Manohla Dargis' article "The Festival World, and What's Beyond." Online, it's photo 14.) 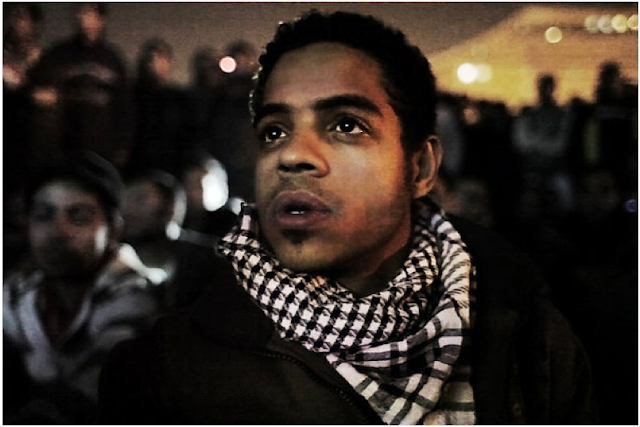 Almost three years later, Egypt is a total mess. But those were glorious days on Tahrir, in early 2011, it is important to remember, and it ("the revolution" or whatever it is) is not necessarily over. And the kufiya was and continues to be an important sartorial symbol of those days. And of coming ones.

Meanwhile, here's a trailer for the film. And more kufiyas.

Posted by Ted Swedenburg at 8:25 AM

But those were glorious days on Tahrir

There is no glory in any kind of war. The Tahrir incident was nothing but mere clashes instigated by splinterist sleeper cells acting on foreign interest agendas for countries as far and wide as Holland, Italy, France, and of course, the U.S. and Great Britain. Neo-imperialist other countries include, Qatar and Saudi Arabia, plus the latest addition to this roster of the United Arab Emirates.

This is no war to begin with. And, no it's not a revolution, too. The Egyptian people are now biting the bitter ass-end of their own sectoral hatred and are actually finding this entertaining at last after a three-decade of them being under the siege of a totalitarian, ex-socialist stratocracy led by the Mubarak regime; which is still there in the ruling seat today.

It can be best described as a farce, while the population still dreams of a better life in the Arabian Gulf, or maybe in neighbouring Libya. Drugs, crazed-up music, and self-incestuous sex are fueling them on and on. This so-called ''Sawrah' has left the Egyptians dizzy for more of these three, most-sought after delicacies of life in general.