Ahmed Saber (1930-71) is one of Oran's most celebrated ouahrani artists. One could also simply call the genre he performed in, as does the blog Phocéephone, "algérien moderne."

Phocéephone recently posted a couple of terrific tracks from Ahmed Saber, which it describes as having a Berber rhythm, an Arab arrangement. They are: "El Khedma"

as well as a photo of the '45 record jacket: 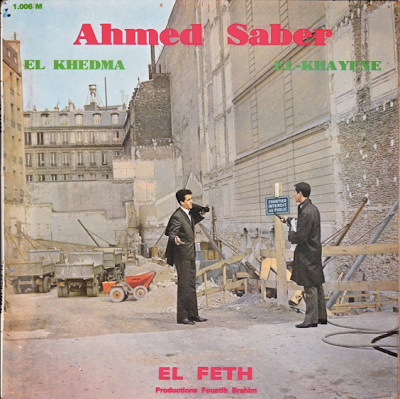 And finally, Phocéephone posted a link to an article about Ahmed Saber, in French. It treads a little more lightly than Andy Morgan does in his article about rai in the Rough Guide to World Music. According to Morgan, Saber was critical of the Algerian regime that came to power after independence, and the song "El-Khayene" (The Thief), was a critique of official corruption, as was "El Khedma," which goes, “Bouh bouh el khedma welat oujouh” (Oh, oh, you get a job by pulling strings). Saber used to get in trouble with the censors and spent some time in jail, before passing away, after a brief illness, in 1971.

(Ouahrani of course stands as a great genre in its own right, but it is through rai that I got interested in it, and in my research I'm interested in the various strands that go into the making of rai as it emerges in the seventies.)
Posted by Ted Swedenburg at 10:14 PM