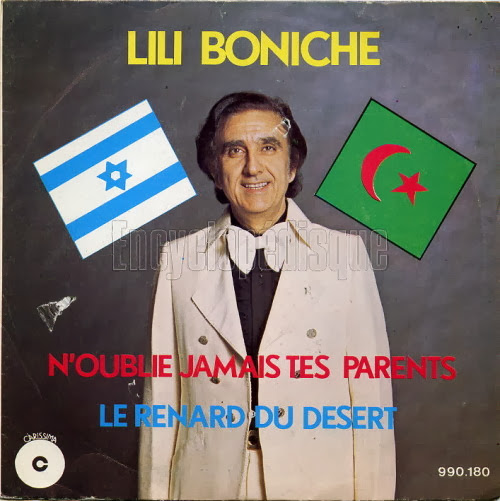 In a previous post I wished that Jewish Morocco's post on cover cheikhs had provided the name of the Lili Boniche disco track he referred to. And now he has supplied it. The track in question is "Le renard du desert" (the Desert Fox, i.e. Field Marshal Rommel?!), the B side of this 45". It was released in 1976 on the French Carissima label.

Unfortunately I've not been able to find the track in question. The 1976 version of the A side, "N'oublie jamais tes parents" (Never forget your parents), I've not found either. But here's an updated version, from 2003. And an earlier version (but from when?) is available on his Anthologie album.

Now, how about the outfit he's in here? And that bow tie?! As for the two flags (Israel, Algeria), a pairing which would not please many Algerians or Israelis, that is symptomatic of the two incongruous pulls on the identity and loyalties of an Algerian Jew ("The Crooner of the Casbah"), based in France ever since the 1950s or '60s. Lili Boniche (b. 1921) passed away in Paris in 2008.

A great introduction to Boniche is the album he recorded with Bill Laswell in 1999, Alger, Alger (APC), which, alas, is now out of print.
Posted by Ted Swedenburg at 10:42 AM