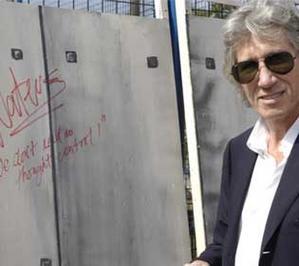 Check out this very compelling video advertisement for War On Want, a British-based anti-poverty organization, and its campaign against Israel’s apartheid wall. The video features music stars Belle & Sebastian on a tour of the wall, as well as music by a Palestinian hip-hop group. The anti-wall Writings on the Wall campaign was launched by Roger Waters of Pink Floyd in June 2004. The image gallery features luminaries like Roger Waters (pictured above), Shane MacGowan (The Pogues), writer Naomi Klein, Billy Bragg, Jerry Dammers (The Specials), and others, including MPs, signing the model wall in support of the campaign.

Check out the site, sign up for the campaign(s).

Why do no US music stars get involved in such campaigns? Is it still too dangerous to a US artist’s career to utter the word Palestine?
Posted by Ted Swedenburg at 2:27 PM