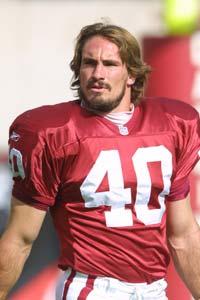 I've become pretty disaffected with the rampant commercialization of professional and college sports as well as with what I regard as the pervasive corrupting influence of sports on our educational system. So I'm glad to find a couple hopeful signs.

First, there is the speech Washington Wizards' power forward Etan Thomas at the September 24 anti-war rally in Washington, DC. According to Dave Zirn, writing in Common Dreams, it was electrifying. The transcript is here. A couple excerpts:

Giving all honor, thanks and praises to God for courage and wisdom, this is a very important rally. I'd like to thank you for allowing me to share my thoughts, feelings and concerns regarding a tremendous problem that we are currently facing. This problem is universal, transcending race, economic background, religion, and culture, and this problem is none other than the current administration which has set up shop in the White House.

In fact, I'd like to take some of these cats on a field trip. I want to get big yellow buses with no air conditioner and no seatbelts and round up Bill O'Reilly, Pat Buchanan, Trent Lott, Sean Hannity, Dick Cheney, Jeb Bush, Bush Jr. and Bush Sr., John Ashcroft, Giuliani, Ed Gillespie, Katherine Harris, that little bow-tied Tucker Carlson and any other right-wing conservative Republicans I can think of, and take them all on a trip to the ‘hood. Not to do no 30-minute documentary. I mean, I want to drop them off and leave them there, let them become one with the other side of the tracks, get them four mouths to feed and no welfare, have scare tactics run through them like a laxative, criticizing them for needing assistance.

And then there's Pat Tillman, former NFL star (Arizona Cardinals) and Army Ranger, killed last year (April 22) in Afghanistan and immediately turned into a war hero/football star by the Pentagon and White House propaganda machine. Turned out later he was killed by "friendly fire." Now an article in the San Francisco Chronicle reveals that there are significant contradictions in testimony in the three previous Army investigations into Tillman's killing, and, according to the Chronicle, suggestions that the Army fiddled with evidence to try to protect itself.

What is more remarkable about the article is that it turns out that Tillman, according to his family, was a staunch critic of Bush's war in Iraq and an avid reader--and fan of the writings of Noam Chomsky. One of Tillman's fellow soldiers recounts a conversation from 2003, when Tillman's unit was serving in Iraq in 2003:

“We were outside of (a city in southern Iraq) watching as bombs were dropping on the town. We were at an old air base, me, Kevin and Pat, we weren’t in the fight right then. We were talking. And Pat said, ‘You know, this war is so f— illegal.’ And we all said, ‘Yeah.’ That’s who he was. He totally was against Bush.”

The Tillman story is also recounted in the October 24 issue of The Nation, in an article (again) by Dave Zirin.
Posted by Ted Swedenburg at 12:23 PM