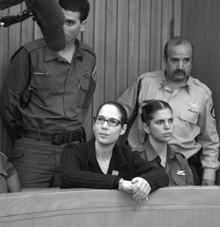 Tali Fahima is a 29 year-old Israeli Jew, of Algerian background. She has been under administrative detention (a punishment that thousands of Palestinians and a few rightist Israelis have endured) since August 2004, as a "danger to the State." Charged with participating in the preparation of attacks, of giving assistance to the enemy in time of war, and of illegally carrying a weapon, Tali's trial began in July and is being conducted behind closed doors.

Based on a recent article in Le Monde, it seems that Tali's chief crime is to have been involved in a humanitarian project with children in the Janin refugee camp in the West Bank in 2003-2004. In order to do her work, she applied for permission to the young leader of Janin camp's al-Aqsa Brigade, Zacharia Zubeidi, a wanted "terrorist" in Israel. In response to Israel's campaign of assassination of Palestinian militants, Tali stated that she would be ready to serve as a "human shield" for Zubeidi.

Among the many remarkable features of this story is that Tali is from a typical Mizrahi (Arab Jewish) family, from Kiryat Gat, one of Israel's working class "development towns" that warehouses Mizrahim, and a lifelong Likud supporter.
Posted by Ted Swedenburg at 11:43 PM