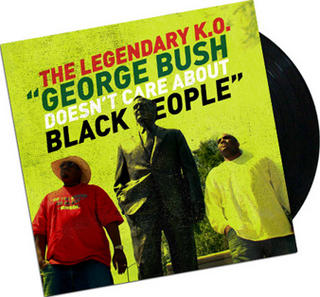 Much as I appreciate this rap, I tend to agree with Adolph Reed Jr.'s analysis of Katrina in The Nation (Oct. 6). Reed argues that

Class will almost certainly turn out to be a better predictor than race of who was able to evacuate, who drowned, who was left to fester in the Superdome or on overpasses, who is stuck in shelters in Houston or Baton Rouge, or who is randomly dispersed to the four winds. I'm certain that class is also a better predictor than race of whose emotional attachments to place will be factored into plans for reconstructing the city.

Race is too blunt an analytical tool even when inequality is expressed in glaring racial disparities. Its meanings are too vague. We can see already that the charges of racial insensitivity and neglect threaten to divert the focus of the Katrina outrage to a secondary debate about how Bush feels about blacks and whether the sources of the travesty visited upon poor New Orleanians were "color blind" or racist.