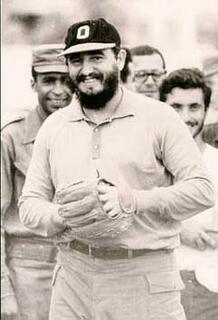 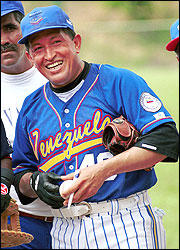 Joel Gordon suggests that since the White Sox are skippered by a Venezuelan, Oswaldo "Ozzie" Guillen, and their pitching staff is anchored by a Venezuelan (Freddy Garcia) and two Cuban exiles (Jose Contreras, Orlando Hernandez), then maybe Hugo Chavez and/or Fidel Castro be asked to throw out the first ball this weekend? (And plus, there's Cuban Joey Cora on third.)

I vote for Chavez. He called up Ozzie to congratulate him on winning the playoffs, and had Ozzie on his weekly radio show. Plus, Ozzie is a Chavez fan:

"I would say I was honored," Guillen recalled about his appearance a week ago Sunday [October 1] on Chavez's national radio show. "Not too many people like the president. I do. My mom will kill me, but it's an honor to talk to the president."