Merle Haggard: US Out of Iraq 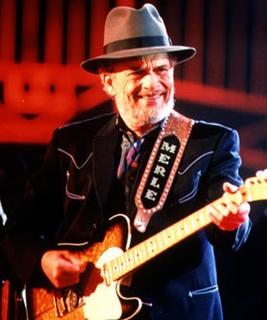 Merle Haggard has released a new album, “Chicago Wind,” and it contains a couple songs that harshly criticize the war in Iraq and its negative effects on the US. “Rebuild America First” includes the following lyrics:

Yea, men in position but backing away
Freedom is stuck in reverse
Let's get out of Iraq and get back on the track
And let's rebuild America first.

Why don’t we liberate these United States?
We’re the ones who need it the worst
Let the rest of the world help us for a change
And let’s rebuild America first

On “Where’s All the Freedom”:

Are we a nation under God anymore?
How long do we cower down?
Is this really still our ground?
Our country is like a prisoner of war
Where's all the freedom that we're fightin' for?

Given that the war is massively unpopular, Merle’s sentiments should not be all that surprising. It would only appear remarkable if you considered Merle as a dyed-in-the-wool reactionary, as many political progressives (who tend not to like country music anyway) seem to do. But “Okie from Muskogee,” as far as I’ve heard, was originally meant as a spoof. Okay, I have no defence for “Fightin’ Side of Me.” But when it comes to songs that articulate a working class sensibility, I don’t think there’s any country artist who does it better. I’ve seen Merle in concert twice, and he’s one of the best artists I’ve ever seen perform.

I got the lyrics from an article by Chet Flippo about Merle’s latest album on cmt.com (and reprinted by CounterPunch), and in a short note by Ben Ratliff in the New York Times.

So add Merle to the anti-war country ranks, along with Mary Gauthier, and against Clint Black.
Posted by Ted Swedenburg at 9:35 PM

Even if Merle is a "dyed-in-the-wool reactionary" (something I doubt), why can't reactionaries be against stupidity and lies? Let's not be so fast in pigeonholing folks and stereotyping them by those pigeonholes. Hey, we're all Americans first. If we stand against our common enemies (like those who would kill all our young men and women in a useless and senseless war that's depleting the national treasury at the same time), then we, the people can take back the country. Then we can work out the petty differences that are probably less than those fools with the power want us to think.