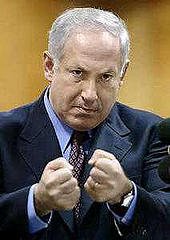 Iranian president Ahmadinejad's statement that Israel "should be wiped off the map" is, of course, execrable. But the reaction in the West and particularly the US, including a condemnation by the UN Security Council, is extremely hypocritical. Iran presents little concrete threat to Israel, whereas Israel's violence against Palestinians is an ongoing, daily occurrence.

Moreover, one could cite dozens of similar statements by Israel's leaders about the Palestinians, statements never condemned by the US media or the UN Security Council.

Here's one, advocating ethnic cleansing, from ex-Prime Minister Benjamin "Bibi" Netanyahu of the Likud. Speaking in 1989 at Bar-Ilan University, when he was serving as deputy foreign minister, he declared: "Israel should have taken advantage of the suppression of the [Tiananmen] demonstrations in China [in summer 1989], while the world's attention was focused on these events, and should have carried out mass deportations of Arabs from the territories. Unfortunately, this plan I proposed did not gain support, yet I still suggest to put it into action." (Reported in Yediot Aharanot, Nov. 24, 1989 and quoted by Alexander Cockburn, "Beat the Devil," The Nation, Jan. 8 & 15, pp. 42-43. I cite it in my book, Memories of Revolt.)
Posted by Ted Swedenburg at 8:42 PM

Did you notice in the immediate Israeli responses, Ariel Sharon said something like "Never has one national leader called for the destruction of another nation" (with no self-consciousness at all), while Shimon Peres was more careful to say that "Never has a UN member called the destruction of another UN member"--fully aware that, were Palestine considered a nation by Isreal and did such statements result in longer left legs, Israeli leaders would be lying on their right sides by now...