Just in case anyone had any illusions that the mass demonstrations that took place in Tehran earlier today represent a pro-Western movement that might somehow be sympathetic with US pro-Israel foreign policy: just check out this photo of one of the demonstrators. This image was screened three times tonight on the Rachel Maddow show. No doubt it is circulating widely. 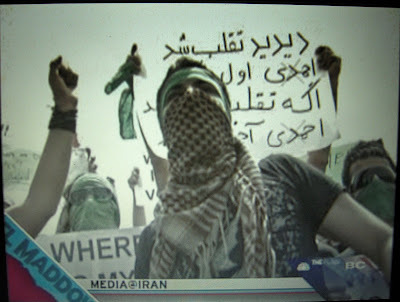 And then there's this: Kamran Rastegar reported this on facebook today:

Later in the day, Kamran posted:

Love to our Palestinian, Lebanese and other Arab supporters in the struggle in Iran... Kullina Ghazzeh, Kullina Tehran! [we are all Gaza, we are all Tehran].

Indeed. On the youtube videos I watched of the Tehran demos yesterday and today, I heard demonstrators chanting, "marg bar diktator," or, "death to the dictator," i.e., Ahmadinejad. The slogan of the Iranian revolution was "marg bar shah": "death to the shah." About time that the symbol of Palestine solidarity was taken out of the hands of the cynical holocaust denier.
Posted by Ted Swedenburg at 11:30 PM

Thanks for the links and connections. Hadn't seen this on Twitter yet, so will post there. One correction, it should be "mard bar…"

Thanks! My Persian abilities are virtually non-existent, so I need all the help I can get.

Alexander said...
This comment has been removed by the author.
11:08 AM

ok. now i've got it right. and i doublechecked other sources. apologies to all Persian speakers.

My understanding is that the 'dictator' in question is not Ahmadinejad but rather Khameini.

Ouch! Total brain fart on my end. Switched to Urdu instead of Persian (murdabad in Urdu). Thanks for the catch.

Hi Ted, just found your blog here through the intertubes. I don't have anything substatnive to add here, but I'll be reading. Talks oon I hope, best Eric Johnson