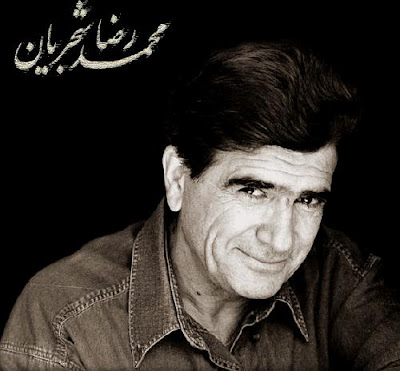 1. I've tracked down the context in which renowned Iranian singer Mohammad Reza Shajarian asked the Iranian state radio to stop broadcasting his songs. I quote some excerpts from an article in The Guardian on Thursday:

When it was uttered it was meant as a ­biting put-down to the thousands who dared to question his re-election as president of Iran.

"The nation's huge river would not leave any opportunity for the expression of dirt and dust," said Mahmoud Ahmadinejad in a rather elliptical reference to the surging protests on the streets of Tehran...

But, just as street protests the world over seize upon a poignant image to convey their message, so Ahmadinejad's contemptuous phrase "dirt and dust" has entered folklore and provided a focus for the rage of the protesters.

So far it has inspired pithy slogans, blog headlines, posters and a litany of insults throwing the president's words back in his face. "Dirt and dust is you, it is you who are the enemy of Iran," one chant goes. Another frequently-heard slogan has been: "We are not dirt and dust, we are Iran's nation."

The phrase (khas o khashak in Farsi) has become a badge of pride. Etemad-e Melli, a reformist newspaper, carried a huge picture on yesterday's front page showing marchers carrying a banner bearing the slogan, Epic of Dirt and Dust. The offending words were written in green, the colour adopted by Mousavi's campaign.

It has also prompted a high-profile protest from one of Iran's most famous singers, Mohammad Reza Shajarian, who asked the state broadcaster IRIB – controlled by Ahmadinejad supporters – to stop playing his songs because he believed the insulting reference included him.

"I emphatically ask IRIB not to broadcast my voice because this is the voice of dirt and dust and will always remain so," he told BBC Persian.

My friend Shiva tells me that Shajarian has been participating in the protest marches in Tehran this week as well. I've seen him perform in New York, with Hossein Alizadeh and Kayhan Kalhor (with Shiva), and I highly recommend buying any of his recordings, because it is great music, and you get to show support for a progressive artist.

2. Iranian film director and Mousavi spokesperson Mohsen Makhmalbaf issued a statement on behalf of Mousavi yesterday, published in The Guardian. In it, he refers to Mousavi's relation to the arts scene in Iran--as mentioned in my previous post:

In order to neu[t]ralise his power, the position of prime minister was eliminated from the constitution and he was pushed out of politics. So Mousavi returned to the world of artists because in a country where there are no real political parties, artists can act as a party. The artists supported Khatami and now they support Mousavi.

Previously, he was revolutionary, because everyone inside the system was a revolutionary. But now he's a reformer.

3. Mark Levine, author of Heavy Metal Islam, is blogging about hip hop and heavy metal artists in Iran and their thoughts about the current protests. He's constantly updating the post, so keep checking back. Mark also links to the galleys of his chapter on Iran in Heavy Metal Islam, if you are interested in more background.

one of the main complaints i'm getting from friends in iran is that they are getting hardly any support from the arab world. ahmadinejad is very popular there bc of his 'standing up' to israel and the US (in my mind, it's more like professional wrestling--the iron sheikh vs sargeant slaughter) and no one caring what it actually means to live under the current system. i'm working on a piece now on how hosni mubarak must be viewing what's happening here. it's hard to imagine the egyptian people putting up with another sham election in their country after the courage displayed by iranians. but it is true from what i can tell that support for the iranian people from the arab ngo/activist sector has been relatively weak. if anyone has good examples to the opposite, please send them my way.

I too would be interested in comment on that subject. What is opinion in the Arab world? 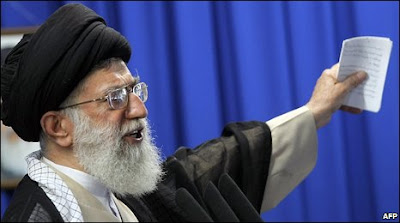 4. Finally, when Ayatollah Ali Khamenei delivered his speech yesterday calling on supporters of the opposition to end their protests, and asserting that there was no vote rigging or cheating in the elections, he wore a robe trimmed with the pattern of the black-and-white kufiya. Reasserting, then, that he and Ahmadinejad are the Iranian representatives of the sacred cause of Palestine. As noted previously, some of the protesters are contesting this. Just as they are contesting the ownership of the slogan of the Iranian Revolution, "allah-o akbar."
Posted by Ted Swedenburg at 3:49 PM

Both http://beta.meedan.net/ and http://www.mideastyouth.com/ have been trying to collate Arab reactions to Iran.

Alexander said...
This comment has been removed by the author.
9:31 AM