Reactions to Obama, Israel and Egypt (with kufiya content) 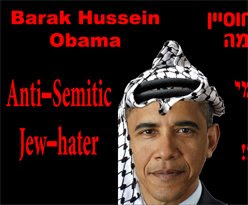 Here's a poster of Obama that a right-wing Israeli group is circulating to protest Barack Hussein's supposed ostensible Jew-hating, courtesy the blog, Improvisation: Arab Woman Progressive Voice. (Thanks, Tahereh.) The claim, of course, is way over the top, but it's symptomatic of real nervousness in Israel about Obama.

The practice of photoshopping the kufiya over the head of any political opponent is routine representational practice on the Israeli far right. I'm reproducing below an image I posted previously. It's a poster plastered around Israel in the run-up to George W. Bush's visit to the country in 2008. I mean, if the far-right could label Bush (not to mention Olmert and Peres) as an 'accomplice to terror,' of course, Obama must be an anti-Semite. Right? 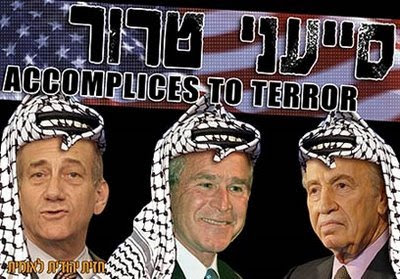 Many observers have noted that Obama's speech in Cairo today was, while critical of Israeli expansion of settlements, quite soft on Israel's oppressive policies towards the Palestinians.

Meanwhile, reaction to Obama's Middle East visit was quite positive in Egypt, as indicated by this tourist item for sale in Cairo's Khan El-Khalili (from fridayinla, on flickr--thanks, Robin). Much of this enthusiasm, no doubt, has to do with Egyptian nationalism--the fact that Obama gave his speech in Egypt, as opposed to another Muslim or Middle Eastern country. 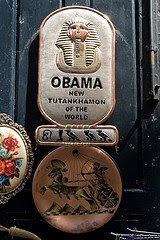 For the positive feelings to translate into anything meaningful, however, will require that the US really pressure Israel to not only stop settlement expansion but also dismantle the settlements and leave all of the West Bank, for good. And to negotiate with Hamas and abandon the imprisoning and ruinous blockade of Gaza. Not to mention getting out of Iraq and Afghanistan. Nice words, but more action needed!
Posted by Ted Swedenburg at 5:06 PM

I remember already in the 1990s that the far right in Israel superimposed photos of Rabin in a keffiya, all intended to instigate fear in the minds of the public

Obama's Address in Cairo. Addressing the muslim world. It is indeed very interesting to hear what the President of United States have to say about muslims. This is truly a new page upon which history is being written.