First up, a youtube video from Iranian rapper Salome, whom I learned about courtesy of Mark Levine's Heavy Metal Islam. And thank God I did, for she is a terrific rapper. I embedded the video in my earlier post about my Interzone Radio "All Iran" show, but I wanted to say more about it.

The song, "Dad Bezan Sedat Berese (Scream to Let Your Voice Be Heard)," was written in response to, and in criticism of, Israel's recent assault on Gaza (December '08-January '09). It provides evidence that the young people of Iran, who are the main social force sustaining the current political mobilization, are not simply Westernized elitists. There is no reason to expect that love for Israel will be unleashed if the forces represented by the Opposition movement comes to power.

It occurred to me a few days ago that supporters of Palestinian and Iranian rights should start wearing green kufiyas to express solidarity with both movements. I posted this random thought on Facebook, and guess what? My niece, who lives in New York City, posted me a few hours later that she was at an Iran rally (June 21), and had spotted a green kufiya. A bit later she posted on Facebook that she had seen another. Let's get this trend going!

More anecdotal information: A friend who recently returned from Iran wrote me this:

On Saturday (the day after the election), I was at a demonstration and when the riot police showed up on their motor bikes, someone in the crowd yelled "the Israelis are here, run!" Also, two different people mentioned to me that "they [the authorities] have turned Iran into Palestine."

The song, "Biyaa," features footage of the recent demonstrations in Iran. "A song dedicated to the courageous people of Iran, in support of freedom and Unity!", Abjeez writes on their Facebook page.

Abjeez ("sister" in Persian slang) are, surprise, two Iranian sisters, Safoura and Melody Safavi, based in Sweden. More info is available here. I've posted about them previously. Check out their other videos, on youtube and elsewhere, they are very clever and the music is terrific. Download the song here. I hope that an English translation is forthcoming. 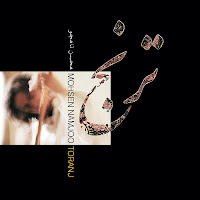 3. For those looking for more Iranian music in a modern vein, I highly recommend Mohsen Namjoo's album Toranj, which is available from emusic. A good article about Namjoo is here. But I cringe at the Bob Dylan comparison--too easy--and think he should be more properly thought of as Iran's Bob Marley or Fela Kuti.

Four of Iran's soccer players have now been "retired" from the sport, after they wore green in their match last Wednesday with South Korea.

We have found each other again. Even with all the violence happening in Iran, the Iranian people are more kind to each other now. For example, some put their motorcylces on fire, destroy their vehicles, so the fuels of their vehicles suppress the effects of the tear gas. They are defending each other. Around the world, we see that people have put their differences aside.

Bahari is a veteran reporter who has covered Iran for the BBC and Newsweek. Hajjarian was formerly a top adviser to former President Mohammad Khatami. As he was shot by right-wing vigilantes in 2000 and has been physically disabled since then, MERIP is deeply concerned about his health while in detention.

"Bahari and Hajjarian would be the first to note that their arrests are only two among hundreds, if not more," commented Shiva Balaghi, an editor of Middle East Report, where the work of the two writers has appeared. There are several reliable reports of torture and other maltreatment in Iranian prisons.

Hajjarian was interviewed in 2000 about Iran's "reformist moment" by Kaveh Ehsani. The text of the interview is accessible online at: http://www.merip.org/mero/mero031300.html.

More to follow...Stay tuned.
Posted by Ted Swedenburg at 4:18 PM

Alexander said...
This comment has been removed by the author.
8:43 AM