The Mother Jones blog published an article about kufiyas this week, by Sonja Sharp, and entitled "Your Intifada: Now Made in China!" For the most part, Sharp goes over material that hawgblawg has covered obsessively over the last year or so. (My first post on the demise of Palestinian-manufactured kufiyas is here.) But here is the key argument:

...why is the the last keffiyeh factory in Palestine about to go out of business?

That's because the one you're wearing (and, increasingly, the ones Palestinians are wearing) are now made in China.

Here's how it happened: Back in '87, during the first intifada, intifadniks couldn't get enough of Palestinian-made $25 scarves. Looser export restrictions meant that Israelis could rep them too, and slowly but surely the scarf and its emblematic pattern began appearing in the West. By the time the second intifada happened in 2000, hardcore activists and the super cool already had them. Then the keffiyeh trend reached its tipping point, and hipsters' insatiable lust for the scarf lured Chinese manufactures into the gig. Fast forward a decade, and Chinese keffiyehs are the norm.

Ironically, global support for Palestinian-statehood-as-fashion-accessory has put yet another nail in the coffin of the Occupied Territories' beleaguered economy. What's next?

So, hipsters are to blame for the decline of Palestinian industry? Ah, they are so easy to blame, aren't they?

But as more responsible reporting suggests, it probably makes more sense to blame the "peace process," which caused the West Bank to open up to "free trade" but created no viable national authority that could impose imports. But maybe criticizing the "peace process" would be too radical a step for Sharp.

One thing that Sharp could have done is to promote the purchase of Palestinian kufiyas by providing a link to the The Kufiyeh Project. (Note to The Kufiyeh Project: get the Hirbawi factory to make green kufiyas, so that we can show our solidarity with both Palestine and Iran. If you need a green kufiya, try the Arab American National Museum.)

And a footnote to earlier kufiyaspotting posts. Here's another photo I found of Colin Farrell (man, he has been photographed a lot in kufiya!--see here and here.) 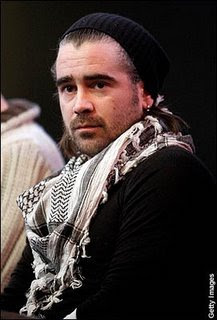 And here's a photo of a kufiya from designer Isabel Marant, from her Fall/Winter 2008 Runway Show (courtesy Mick Margo, writing in the Fashion Journal): 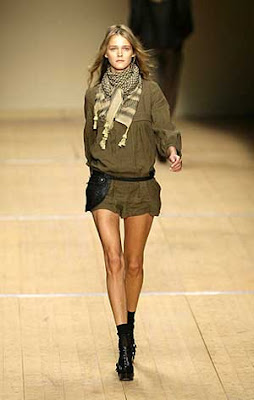 Posted by Ted Swedenburg at 3:34 PM