Culture and sports notes on #iranelection

I'm passing on the 'new media,' since every single news media outlet has now published an article on the so-called twitter revolution, and so many have already said (and I even wrote it on Facebook): the revolution will be tweeted, facebooked and youtubed. (And flickred.)

First up is Shiva Balaghi's invaluable report on Middle East Report Online, published a few days before the election, "An Artist as President of the Islamic Republic of Iran?".

Some of Iran’s leading intellectuals and cultural figures have been actively campaigning for [Mir-Hossein] Mousavi. They attended a May rally in Azadi Stadium, marking the anniversary of the 1997 election of President Khatami. The Oscar-nominated director Majid Majidi made Mousavi’s official campaign video. Over 800 filmmakers and actors signed a public letter published in Iranian newspapers supporting Mousavi’s candidacy. Leading directors like Dariush Mehrjui, Mohsen Makhmalbaf, Manijeh Hekmat, and Masoud Kimiai appeared in a ten-minute video, “Green Stars,” distributed on YouTube, calling on Iranians to vote -- and to vote for Mousavi...An architect and an artist himself, Mousavi has garnered increasing support amongst Iran’s culture workers who have faced growing pressures in Ahmadinejad’s regime.

Second--and again, my source is Shiva--the renowned Iranian singer Mohammed-Reza Shajarian, who is probably the greatest performer of Persian classical music, has protested that Iranian state television used his music in their pro-Ahmadinejad broadcasts.

Check him out, performing with Kayhan Kalhor (kamancheh) and Hossein Alizadeh (tar).

Finally (and again, thanks to Shiva for alerting me to this):

Five Iranian soccer players, including captain Ali Karimi, wore green wristbands in an apparent sign of support for Mousavi at a World Cup Asian qualifying match in South Korea. State television showed the players wearing them for the entire first half, but the bands were gone by the time the second half started. (from MSNBC) 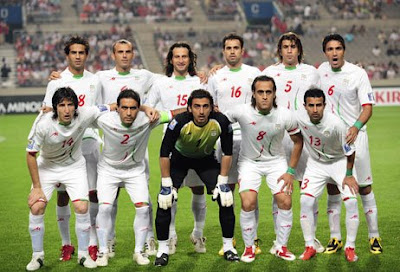