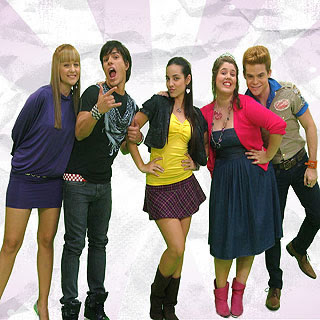 Isa TKM is a teenage telenovela from Nickelodeon Latin America, which has been broadcast in several latin American countries, and premiered last week on MTV Tr3s. (I was alerted to the music for the show by Jon Caramica in today's NYT--but for some reason I can't find the link.)

Check out the video for the song "Ven a Bailar," a delightful bit of bubblegum pop, which is just the thing for fans of The Archies and all their successors. (It's available on the show's soundtrack.) In it, Alex (Reinaldo Zavarce), the guitarist, can be seen bopping around, wearing one of those "kufiya print" t-shirts. (Otherwise known as trompe d'oeil.) The first season was filmed in Venezuela--was Hugo Chavez an influence in the style choices made in the vid?
Posted by Ted Swedenburg at 11:59 AM

Alexander said...
This comment has been removed by the author.
1:47 PM

oi vay, oldtimers disease has really set in. thanks, i've changed it.