This press release was issued today:

The Middle East Research and Information Project (MERIP) condemns the arbitrary arrest and detention of the economist Bijan Khajehpour by authorities of the Islamic Republic of Iran. Khajehpour was snatched from the Tehran airport on June 27 upon arrival from Britain. His whereabouts are thus far unknown to his wife, two young children, family, friends and colleagues.

His arrest fits into the deeply disturbing pattern on display since the Islamic Republic moved to quash popular dissent from the official "result" of the June 12 presidential election. On June 30 the Guardian Council, an unelected and unaccountable clerical body, "certified" that "result" on the basis of an internal review of only 10 percent of the ballots. Hundreds, if not thousands, of Iranian citizens are in jail because they have spoken out for more transparent democratic procedures and the rule of law in Iran.

Khajehpour is chief executive officer of Atieh Bahar Consulting, a highly respected firm based in Tehran, and author of tens of articles on Iranian political economy. He suffers from diabetes, and MERIP is very concerned about his health while in detention.

"It's impossible to know what is happening in the hardliners' 'black sites,'" remarked Kaveh Ehsani, an editor of Middle East Report, where Khajehpour's work has been published. Reports of torture during the post-election crackdown are so numerous as to be impossible to dismiss. The Islamic Republic has an execrable record of maltreatment of prisoners, one no better than that of the regime it replaced.

MERIP points to articles of the constitution of the Islamic Republic of Iran which prohibit such maltreatment, outlaw the persecution of individuals for their beliefs, protect freedom of speech and the press and permit the free holding of public gatherings. These articles correspond to legal protections enshrined in the UN Covenant on Civil and Political Rights, to which Iran is a signatory.

"Unfortunately, the powers that be in today's Islamic Republic seem bent on flouting the constitution, with a brazenness unseen in recent years," continued Arang Keshavarzian, another Middle East Report editor who was in Iran during the June 12 voting. The Guardian Council's opaque and incomplete review of ballots is the most recent signal to this effect.

"Anyone who is still attuned to the hardliners' 'anti-imperialist' siren song should ask themselves why so many principled Iranians are in jail for closing their ears to it," added Chris Toensing, executive director of MERIP.

MERIP calls upon all defenders of human rights to press for an immediate halt to the crackdown on the Iranian dissenters and the prompt release of all persons unjustly detained.

"Protest and Regime Resilience in Iran," Khajehpour's analysis of a previous episode of pro-democracy dissent (Dec. 2002), is available on the MERIP website at: http://www.merip.org/mero/mero121102.html 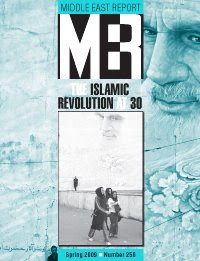 For background on Iran, see the spring 2009 issue of Middle East Report, "The Islamic Revolution at 30." (This should be required reading for all reporters covering the latest events in Iran.)

For an absolutely essential analysis of Iran's latest events:

Posted by Ted Swedenburg at 9:51 AM

Email ThisBlogThis!Share to TwitterShare to FacebookShare to Pinterest
Labels: Iran