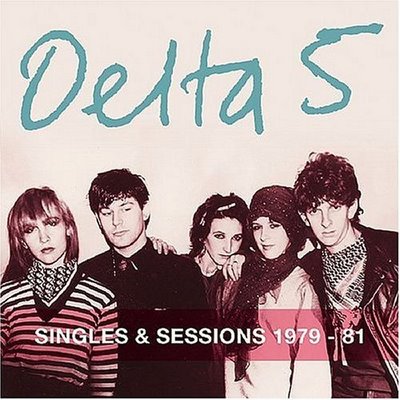 Delta 5 were a great and important and very left-wing & feminist post-punk band from Leeds. I've read a lot about them but was only familiar with their song "Mind Your Own Business" as covered by Chicks on Speed, on the album Will Save Us All! Kill Rock Stars recently released a compilation with three of their singles, plus some BBC and live sessions, from 1979-1981. Now I can finally hear the great Delta 5 that previously I just read about.

It's drummer Kelvin Knight (far right) who is wearing the kufiya. Knight once spent time as the drummer for Gang of Four, also from Leeds, to whom Delta 5 bear a sonic resemblance. Delta 5 also ran in the same circles as another great Leeds post-punk band, The Mekons. In the liner notes to this compilation, Jon Langford of the Mekons (and Waco Brothers and the Pine Valley Cosmonauts) says that the personnel of the Mekons and Gang of Four and Delta 5 were all originally very loosely related and put together bands with names like Mekon Delta 4. I love this, whether it's true or not: it combines the Mekons and Gang of 4 name with Delta, and is (is this too obvious?) a pun on Mekong Delta.

Kufiyas were a very common accessory in leftwing Brit circles at the time.

[Note added November 23, 2012: See the comment below, which clarifies that Kelvin Knight, the kufiya wearer in the photo, was from York, not Leeds, and that he played drums on two classics from The Jermz: "Me and My Baby" and "Power Cut." And he also drummed for The Jerks, another Leeds band that pre-dated Delta 5.

Kelvin Knight was from York not Leeds [big difference],he played drums on The Jermz classic punk 45 'power cut+ me and my baby'.Also drummed for The Jerks who were from Leeds before Delta 5.