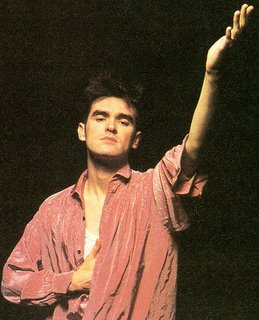 Morrissey (as you all know, the former lead singer of the Smiths, a solo artist since 1987), reports that he has been interviewed by both the FBI and British intelligence over his opposition to the war in Iraq. Morrissey has called Bush a "terrorist." Says Morrissey about the role of music and politics:

I don't belong to any political groups, I don't really say anything unless I'm asked directly and I don't even demonstrate in public. I always assume that so-called authoritarian figures just assume that pop/rock music is slightly insane and an untouchable platform for the working classes to stand up and say something noticeable.

Let's see, if we add Morrissey to the artists listed below, who are performing at the anti-war benefit at the Hammersmith, what do we notice?

Queer as you can possibly get: Peaches.

And Conor Oberst of Bright Eyes looks somewhat metrosexual to me.

Leaving Loudon Wainwright III and Steve Earle as the only unambiguously hetero anti-war msucians on the bill. Except that Loudon's son Rufus Wainwright is gay...