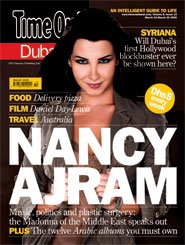 I noticed this browsing at Queer Arab. I'm surprised Marc Lynch (Abu Aardvark) hasn't put this up, but I'm sure he will, he follows Nancy very closely.

The cover article, by Soraya Roberts, is here. You have to sign up to read the entire article, it's a bit of a tedious process, but free.

Here are a few of the interesting bits:

"[I]n the political climate of the 21st century Arab world, Ajram is the new face – and body – of social progress. The most famous pop star in the Middle East has taken subversion out of the newsroom and onto MTV. Whether she admits it or not, her bare midriff and swivelling hips are ushering in a new era of liberalism in the Middle East, much to the chagrin of traditionalists." (Soraya sounds a lot like Abu Aardvark here.)

"This scantily-clad femme fatale [overstated!] who has chosen to go under the knife three times (all before her mid-20s) is the ruler of her own destiny. In all of her videos, Ajram is in the position of power, with men either in the background or shown in a sexually ambiguous light."

"Nor is Ajram apologetic about prioritising her physical appearance. ‘Surgery for me is something very natural; I’m not embarrassed about it,’ she says. When it comes to plastic surgery, Ajram opts to avoid hypocrisy, considering that Lebanon has a well-recorded tradition for extensive nipping and tucking." [Sources tell me plastic surgery for women is at least as epidemic in Lebanon as in the US. Maybe more so.]

"Her aquiline nose and aquamarine eyes are splashed across billboards in her hometown (including a five-storey billboard, which is one of the biggest advertising constructions nationwide) in an advertising deal that reportedly earned her US$2 million. Advertising commitments, coupled with her massive Coca-Cola deal (which made her the face of America’s most recognisable brand) have secured her position as the highest-paid female singer in the Arab world."

"Ajram has been able to flourish in the Arab landscape thanks to the advent of music videos. A cascade of music channels flooded Arab television, from Rotana, also a successful music label, to ART, Future TV, Nagham (Arabic MTV) and LBC, which were all accessible via satellite TV, broadcasting micro mini-wearing musical sirens 24 hours a day."

"Ajram became the object of every Arab male’s fantasy following her video for ‘Akhasmak Ah’ (translated as ‘We Might Disagree’) in which she plays a café proprietor whose vocal pyrotechnics and body gyrations drive her male customers into hysteria. The video caused uproar, not unlike Egyptian films of the ’50s (to which its style has often been compared)..."

"Last year the mayor of Marrakech announced that Ajram could no longer hold concerts in the city to avoid a recurrence of the incidents surrounding her performance in April 2005 (where she performed to 100,000 people), which included ‘sexual harassment, theft [and] excessive alcohol consumption resulting in violence and people fainting.’ Prior to this incident, in 2003, airing of the ‘Akhasmak Aah’ video was banned by the Egyptian parliament for indecency. In the same year, a riot broke out outside a Bahraini concert when radical Islamists attacked Ajram’s fans – with religious leaders defending the violence claiming they were opposing ‘immorality’...In October 2003, Bahrain’s parliament refused to ban Ajram from performing in the city."

"Many of her male fans adore Ajram because she projects the image of the submissive girl next door. Ajram still lives with her family (‘how did you know that?’ she asks, slightly embarrassed) and laughs at rumours about her love life." ["Girl next door" was the ideal Playboy centerfold, at least in the magazine's early decades.]

"Nor does the singer discuss politics, like some of her peers."