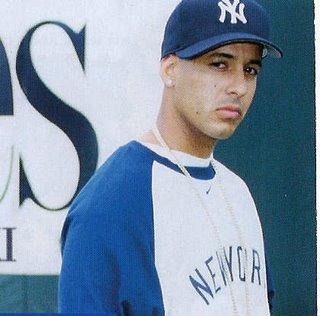 Abu Aardvark posted this segment from a report by Spencer Ackerman on Irbil, Kurdistan a few days ago, and I wanted to add some comments of my own about it. So here's what Abu A. excerpted:

The gas-hustlers have a comfort, though – chilly as it may be in the face of a security crackdown. Wafting through the airwaves and onto the streets of Irbil is an unlikely palliative speaking directly to the Kurdish imagination in this current moment of netherworldly nationhood: reggaetón. At precisely the right moment of national confusion, this hybrid confection of Jamaican dancehall reggae and Latin lyrical thuggishness is musing to northern Iraq about the liberating possibilities of gasolina. In a bizarre but tangible sense, the peshmergas' status as Irbil street bosses has competition from a San Juan rapper named Daddy Yankee.

Gasolina is Daddy Yankee's anthem, the track that earned him his crown as king of reggaetón and a 5,000-word profile in the New York Times Magazine. It's possible to hear the song three times a day over the radio in Irbil, probably more often than it appeared on the New York City FM dial at the height of its stateside ubiquity in 2005.

That's thanks largely to Radio Sawa, the much-derided brainchild of the United States broadcasting board of governors that mixes American pop and agitprop, which mainlines Gasolina directly to Irbil. The song is so popular in the city that a trip to the Happy Times restaurant and shisha lounge in the middle-class neighbourhood of Ainkawa is an invitation to a reggaetón barrage. On a typical evening, the restaurant's massive projector screen shows Daddy Yankee merrily waxing down a woman's shapely and barely-concealed derrière while patrons nod their heads and chew pizza.

Bemused incredulity over the popularity of reggaetón in Kurdistan is among the most telling indications of a first-time visitor.

It would be a stretch to say that the enthusiasm for Gasolina has to do with its subject matter, especially when considering its aggressive rhythm and near-pornographic video. But Daddy Yankee's signature track is a sexually-explicit ode to what gasolina can provide – and here "gasoline" can mean, as Sasha Frere-Jones in the New Yorker, speed, rum, semen or gasoline – and that, of course, is unadulterated pleasure. And at the moment, as Iraq disintegrates, the Kurds are betting quite heavily on what gasoline can do for them.

Abu Aardvark comments, "at least Radio Sawa has had some impact on the Middle East...."

My comment concerns what I think gives Ackerman's report its zing: the apparent "weirdness" of Kurds in Irbil listening to reggaetón. I want to argue that this is not weird at all--except to us Americans who always seem to assume that "Easterners" are essentially different from us and inevitably more backward. We can imagine them drinking Coca-Cola, but not consuming the latest Western pop music craze, especially when they wear those strange headwraps and turbans.

The thing is, the Western mass media, in their various forms, have been around in the "East" ever since they were invented. Cinema shows up in Egypt very shortly after it does in the US. As for Latin music, Cuban music was a world-wide craze in the nineteen fifties. (Of course we know a lot more about its effects in the US and in Africa than we do about its impact on the Middle East.) For instance, a song called "Mambo Sudani" was a big hit in Egypt in the 50's, sung by Sudanese vocalist Sayyid Khalifah (Thanks to Ali for reminding me of the singer's name). As for Iraq, Elizabeth Fernea reports on a visit she and her anthropologist husban Bob made to a shaykh living near Diwaniya in 1956 or 1957, in her book Guests of the Sheik. One of the ways that the shaykh entertained them was by playing "Mambo Italiano" (a hit for Rosemary Clooney in 1954, for Dean Martin in 1955) over and over on his record player. So is it remarkable that people are listening to the Puerto Rican Daddy Yankee in Irbil in 2006, when media is much more globalized than in 1956?

As for his claim that the video for "Gasolina" is "near-pornographic," it is clear that Ackerman has never watched any rap videos, which today virtually always feature scantily clad girls shaking their booty. "Gasolina" is pretty mild compared to some. (And reggaetón is essentially "rap en español.")

Are the Kurds dreaming of all the "gasolina" they will gain control over, if they achieve their dream, and take over Kirkuk?

OK, I've been thinking: Although it's a given that Western media will always find it useful to sell a story by stoking the fires of exoticism and telling stories of the "cute natives" watching David Hasselhoff...

Could it also be, though, that there's a story here that has something to do with the globalization of locality? What I mean is, I've never heard of Daddy Yankee and raggaeton. It's niche pop music. Could this be why the story gets our attention?

(Just like there are tons of people who never heard of DJ Screw or screwed-up music, and I only know about it because I subscribed to Texas Monthly and learned that it was a huge deal in Houston and San Antonio in 2001.)

So the surprising thing might be when music that should for all practical purposes be very localized travels and becomes globalized. So for example, we might learn that conjunto has a huge following in Korea, or that bluegrass is dearly beloved by folks in rural Burma...