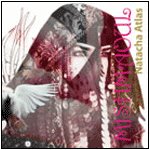 Mish Maoul (Unbelievable) is the title of Natacha Atlas' new solo album, which goes on sale April 25. What is truly "mish maoul" about it is that her record company, Beggars Group, has put up a special website for the release, and you can listen, right now, to the entire album. I've listened to it just once so far, so I can't give a very detailed review, but I can say that it is well worth getting. I've loved every single one of Natacha's previous releases. Mish Maoul is a bit of a change from Natacha's last release, Something Dangerous, which registered the strong influence of Missy Elliott. This one has more of a basic Egyptian pop feel, less hip-hop, but nonetheless contemporary Egyptian pop, incorporating lots of styles, and doing them all very well. I really like "Hayati Inta," which has a very Moroccan feel, and uses the guimbri, the chief instrument of the Gnawa. "Ghanwah Bossanova" (Bossanova Song) is great too, as much lounge as bossa nova. I basically liked everything, and there is not a bad track (although I don't much like the short rap in English, at the opening of "La Lil Khowf" [No to Fear].) So give it a listen, or two, and then go out and buy it.

My review of the Natacha Atlas DVD is here.