The Teaches of Peaches in Arkansas 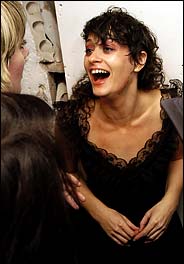 I started using Peaches in my courses when I taught Queer Theory in Spring 2004, and I've subsequently used her and her music in my Popular Culture class (Spring 2005 and Spring 2006). I am currently writing a paper called "Back It Up Boys: Peaches Queers Straight Sex," which focuses on Peaches' song, "Back It Up Boys" (off of Fatherfucker) and the practice of pegging. Accordingly, I have been catching up on my reading about Peaches. I was checking out the archive of articles about Peaches on her website. There I found an article called "Peaches Brew" by John Walshe, published in HotPress (July 2004), and I came across this:

Aside completely from the righteous indignation she often arouses by asking her audiences to shake their dicks, Peaches has had a big impact on the fringes of popular culture. There are regular Peaches lookalike contests held in various parts of the US, and some of her lyrics are studied as part of university courses in Toronto and Arkansas.

Hawgblawg fans, those university courses in Arkansas would be my courses. How do I know? Well I told Peaches that I was using her songs in my classes when I met her in Austin in April 2004. (Here's the evidence that I have met her, in Memphis in October '03. Notice that she's wearing the same dress in the photo with me as she is wearing in the photo here, taken from an article in the Style Section of the New York Times, October 19, 2003.)

In her interviews, Peaches used to talk about how her lyrics were taught at the University of Toronto, now she has added Arkansas to her schtick. I'll keep looking for other evidence.

On another Peaches front, here's a report from the New York Times on her performance on March 20, at the Bring Em Home Now benefit.

Beyond all remonstrations, mild or pointed, lies Peaches, who chanted and rapped over a skinny electronic rhythm-track about sex as a cure for everything. This wasn't totally germane to the evening, but it was weirdly effective anyway; in the right light, sex can stand in for anything, including religion and political resistance.

The full report is here but you have to sign up to view it.