Kufiyaspotting #39: Rage Against the Machine 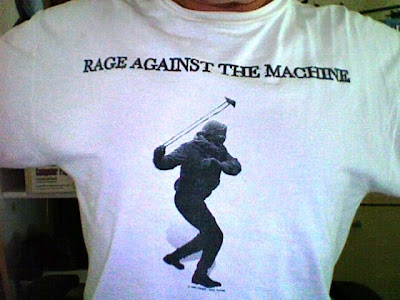 You might imagine that I would have noticed this kufiya earlier. After all, I have had this t-shirt for years. But maybe it's just that I haven't worn it for a long time. Who knows?

The progressive political inclinations of Rage Against the Machine are, of course, very well known. And Rage are one of the few music groups to have mentioned the Palestinian struggle in a positive light. On their song, "Within A Breath," from their terrific third album, The Battle of Los Angeles, Zach de la Rocha sings:

"The masked" refers first and foremost to the Zapatista rebels, the EZLN, the political movement with which Rage were most identified. But also, given the reference to Gaza, it refers to what are known in Palestine as the "mulaththamin," the "masked men," who confronted the Israeli occupiers with their faces wrapped in kufiyas, so as to evade identification by Israeli security.

Here's a video of them performing the song live in Mexico City in 1999:

I have this exact t shirt and i love it. I am trying to find another to replace it and i cannot find one for sale. RAM is one of my favorite Bands because their music is awesome and they stand against injustice.