Asked for his own impressions of these films and the period they capture, Mr. [Andrew] Lampert, 31, hesitated, then said: “I recently watched ‘Easy Rider’ and felt embarrassed for an entire generation. I would hope that life in the ’60s was much more like ‘Chafed Elbows.’ ”

From an article in today's New York Times Arts & Leisure section, about the 60s independent films of Robert Downey--which I had not heard of, nor have I seen. Since they've now been restored, I'll hopefully have a chance. 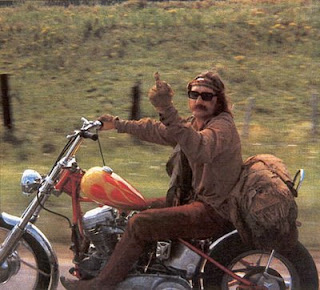 I was pleased to see the jab at Easy Rider. I've wanted to write something about some of the problems I see with iconic films of the sixties, which were much admired at the time, and which I must admit, I too liked a lot when they first came out. (Thanks to AMC, I've had the opportunity to see many of them again, for the first time since the sixties.) Easy Rider celebrates male hippy pot-smoking freeliving renegade motorcycle riders, turning them into martyrs at the hands of Southerners. That is, long-haired virtue is produced at the expense of a stereotype of redneck evil. (There is also an implicit identification made between the victimhood of the white hippies and that of African Americans, who suffered at the hands of crackers during the civil rights struggles.) I remember coming out the of theater after watchin g Easy Rider in summer 1969, feeling shocked and outraged. I didn't ride a motorcycle, but I did have the long hair. So I certainly identified with the Fonda, Hopper and Nicholson characters. It worked with me.

Such infantile and ill-informed sorts of representations (echoed in many other cultural artifacts of the time, like Neil Young's "Southern Man" and the film Deliverance) have had pernicious political effects, and are a part of the complicated story of how the South has gone very Republican. I've lived in Texas and Arkansas for a total of over twenty years, and I still have friends from the coasts, and urban centers in the Midwest, who can't understand how anyone could possibly live in the South or how anything good could possibly come out of (t)here. They are still apprehending the South through the lens of Deliverance and Easy Rider, it seems.

Other films I've been meaning to write brief notes about are MASH and its homophobia and One Flew Over the Cuckoo's Nest and its sexism. I was completely blind to these issues when I originally saw these films. And I considered myself a political radical. I guess I'm trying to make sense of my own memories of the sixties.

So I vote for a revival of "Chafed Elbows." And "Flaming Creatures"!

Hi Professor Swedenburg - I was talking about "Easy Rider" yesterday with someone and a Google search brought up this post of yours describing the movie as a celebration of "male hippy pot-smoking freeliving renegade motorcycle riders". Politically I'm left of center, but this article about "Easy Rider" rings true for me:

I guess blogger won't publish the URL that I ended my comment with. But if you Google "The Secret of Easy Rider", you'll find an article by jfxgillis with an interesting point of view. Warning - He goes on for a few pages before bringing in "Easy Rider".