It's not Dark Knight (which I liked a lot) but Todd Hayne's Bob Dylan biopic, I'm Not There, which I have finally, just now, seen.

I thought the film was stunningly beautiful all the way through, as well as "difficult," but in a productive as opposed to an off-putting way. It helps a lot to prepare for seeing the film, as I did, by viewing Pennebaker's 1967 cinema verité masterpiece Don't Look Back and Scorsese's 2005 PBS documentary Bob Dylan: No Direction Home. And if you really want to be obsessive, read, as I did, David Hajdu's Positively 4th Street: The Lives and Times of Joan Baez, Bob Dylan, Mimi Baez Farina, and Richard Farina (2002).

Cate Blanchett, of course, is utterly fabulous as the mythical Dylan ("Jude Quinn") on tour in '65-'66. The photo above, which I shot, is from Haynes' hilarious fictional rendering of the Dylan going electric at the Newport Folk Festival in 1965 and its effect on the folk crowd. What I don't like about the depiction is that it erases the African-American dimension of this era-changing act. Dylan's backing band at Newport 1965 was composed mostly of the Paul Butterfield Blues Band, which included African-Americans Sam Lay on drums and Jerome Arnold on bass. How cool would it have been if the film showed Dylan and a band that included two black Americans firing machine guns at the folk crowd! (The photo below shows Jerome Arnold on bass; Sam Lay is mostly obscured.) 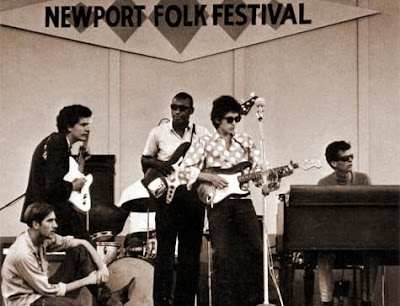 The first time I saw the film, I preferred the Christian Bale role to the Heath Ledger role. Bale plays "Jack Rollins," who is both the political folky Bob Dylan of the Village days, as well as the born-again Christian Bob Dylan. Heath Ledger is Robbie Clark, who plays Jack Rollins in a biopic. I came to appreciate his role much better when I watched the film again, this time with Todd Haynes' very smart and informative commentary. Then I "got" that much of the Robbie Clark footage is shot in the style of Godard's sixties films. And that it attempts to pay tribute to Godard's mixing of love/romance and politics in those films. The Robbie Clark scenes are very effectively punctuated by t.v. news footage of the Vietnam war. Finally Todd Haynes refunctions both Godard and Dylan in that he uses Claire (Robbie's wife, played by Charlotte Gainsbourg) as an active female agent--in contrast with the ways in which men were typically the agents in Godard's films and Dylan's lyrics. As Haynes comments, this was entirely typical of the sixties counterculture and revolutionaries--males who wanted to remake the world but go home to a cooked meal and sex on demand.

Haynes' commentary, I repeat, is invaluable. I didn't know, for instance, that the Coco Rivington character (who Jude Quinn insults cruelly) is based on Edie Sedgwick, with whom Dylan reportedly had a significant fling. And I didn't catch the references to Fellini's 8 1/2 in the Jude Quinn "castle" sequence. I did make the connection of the Richard Gere/Billy the Kidd sequence in Riddle to Bob Dylan's Woodstock and "Basement Tapes" era. (Mainly because the Basement Tapes song, "Going to Acapulco," is playing.) It helps in this regard to have read Greil Marcus' Invisible Republic: Bob Dylan's Basement Tapes (1998), as Haynes notes in his commentary.

With regard to the Richard Gere sequence, Steven Shaviro, in his very incisive review of the film, mentions Peckinpah's Pat Garrett and Billy the Kid, which he considers "the most beautiful Western ever made." I did catch this reference, but I saw this film, ages ago, when it first came out (1973), and I didn't have the same impression as Shaviro at the time. It's now in my netflix queue, and hopefully I'll appreciate it more the second time around. (There's much more to the Shaviro review, check it out.)