1. Thanks to Julia, I've learned that back in June, the Jewish Defense League (ultra-right, homophobic, fascist) organized a demonstration in LA against Freshjive and its owner Rick Klotz, to protest Freshjive's recent t-shirt production. Specifically, it's "Victimized" t, with Palestinian children, and its Arafat "The Good Ol' Days!" t. (Below is a photo of a friend who purchased the latter.) 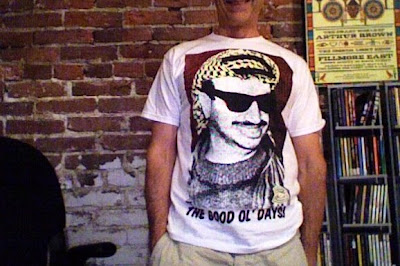 Read my earlier post about these t-shirts here, and about the JDL protest here. You will learn that the leader of the JDL and of demo, Shelley Rubin is the wife of the late Irv Rubin, who died in prison in 2002 while awaiting trial on charges of plotting to kill US congressman Darrell Issa. And you learn that Eazy-E (ex-NWA) once used Irv Rubin and the JDL for protection.

2. Another mundane, non-political kufiyaspotting (thanks to John). "Cool." "African-American." But Northcarolinian and Baptist... 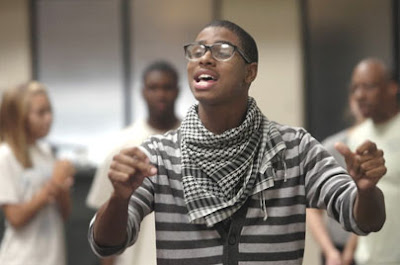 The caption for this photo reads: "Quayshaun Hall, 16, a student at Parkland High, rehearses a number with fellow students at the Winston-Salem Youth Arts Institute. The program they’re preparing will be presented next weekend at First Baptist Church on Fifth Street."

Read more about it here.

3. Today's New York Times Sunday Style section has a wonderful "On the Street" report by Bill Cunningham called "Muffled." If you read the print edition, it's the usual set of colored photos and Cunningham's written report, but if you go online, it's a slideshow with Cunningham's delightful narration. He reports that many women (and some men) are wearing scarves on NYC streets this summer, despite the heat. It's to combat air-conditioning, and it's also a matter of style. If you watch closely, you will see a hint of red kufiya pattern on the third slide. (Update, April 6, 2010: I've now added the slide, below). 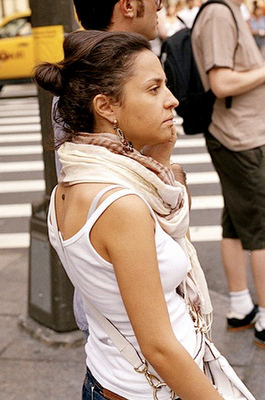 Cunningham says that at first, he thought this spate of "muffling" was related to what people do in the "desert" countries of the Middle East, where they wear wool gossamer scarves to keep the heat out. Maybe he was thinking of kufiyas? Actually, such scarves are more a matter of keeping dust and sun off you. (And in the case of women, it's a matter of either/and/or custom or piety.)
Posted by Ted Swedenburg at 5:34 PM