I was tipped off to this kufiyaspotting by a post on Feral Scholar. Filmmaker Lizzie Borden's film Born in Flames was much discussed at the time of its release (1983) but as I remember, it was widely panned. I remember (I think) being somewhat underwhelmed and disappointed when I saw it (in London, in either 1984 or 85). Watching it again last night, I appreciated it much more. Please read Feral Scholar's post, which provides a very good and detailed summary of the plot, and a fine analysis and appreciation.

The reason that the kufiya comes up in Feral Scholar's account has to do with her irritation with the character of Isabel, played by Adele Bertei (former keyboardist with the no-wave band The Contortions, and the solo vocalist on a truly classic '80s dance hit, "Build Me A Bridge," produced by Thomas Dolby, at the height of his powers. Listen to it, here, and see if it doesn't lodge in your head for days.

Feral scholar likes the other characters of the film, and finds them believable, but is embarassed by the “'wannabe urban Black' act and other bits of identity theft” engaged in by the "Anglo" Isabel character. To wit, cornrows, putting on a kufiya, and some Gil Scott-Heron style rap poetry. I take a rather more charitable view of this "identity theft," and would rather regard it as a kind of "interculturation" peculiar to New York that was going on at the time. This was precisely when hip-hop was getting hip in downtown trendy New York. And the very wonderful soundtrack of the film is quite representative of the kinds of cultural interchanges going on then--it's got funk, rap, punk and post-punk, early 80s disco, and so on. Moreover, the Women's Army--the protagonist of the film, the revolutionary movement that expresses lesbian-feminist dissatisfaction with the democratic-socialist revolution that occurred in the US ten years before the (fictional) time of the film--is a multi-racial coalition. Black women play a leading role, but white and Puerto Rican women play a strong part.

As for the Isabel kufiya, it is in fact neither a "hipster" kufiya or a "political" kufiya, but is worn in a theatrical scene where Isabel is reading feminist poetry, backed by funk music. Presumably the event is in solidarity with the imprisoned Adelaide Norris character. The kufiya is worn over the head, with an 'iqal (the black cord used to secure it as it's traditonally worn), and it is NOT the typical Palestinian kufiya pattern. This then is a "performative" kufiya, not a political solidarity or hipster kufiya as it would have been seen routinely in the early '80s. 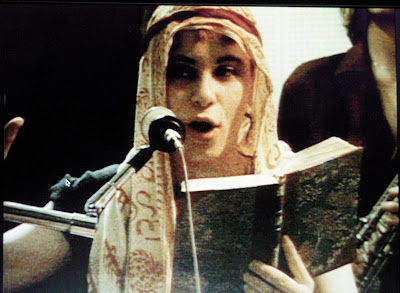 But there are a couple of "solidarity" kufiyas to be seen in the film. One is in the scene where two women--Zella (played by black activist Florynce Kennedy) and an unidentified, older white woman go to inquire about the imprisoned Adelaide Norris at the police station. The older white woman is wearing a black-and-white kufiya around her neck--a very typical "accessory" item worn by activists at the time. (You would see them all the time at Central America solidarity events and at anti-nuke events.)

It is curious, isn't it, that Feral Scholar condemns Isabel's "identity theft," but not this kufiya wearing. 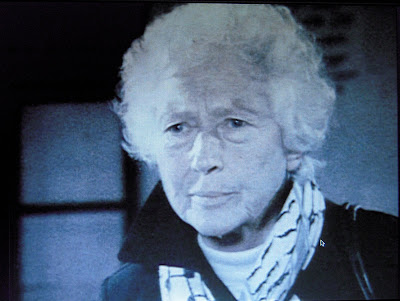 There's also a scene earlier in the film, featuring Zella (Flo Kennedy), who serves as a kind of guru/godmother for the Women's Army. Or maybe better to say, "ideological guide." Zella is making the argument that violence is sometimes necessary to employ in the revolutionary movement. And she is wearing a red kufiya, draped loosely over her head, but without an 'iqal. Worn this way, it looks even more "Arab" and definitely not hipster and not accessorized. 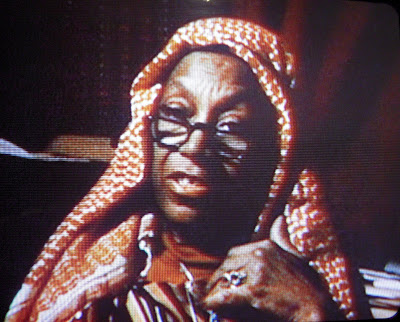 And that's not the end of it. When the Women's Army decides to undertake armed struggle, Adelaide Norris goes to the Western Sahara (former Spanish Sahara) to observe the struggle of the Saharans against Moroccan occupation, and to obtain weapons from them. (At the time of filming, the Polisario Front was actively engaged in a liberation struggle to free the Western Sahara.) Interestingly, the only fighters we see in the Sahara are women, who wear military uniforms, carry weapons, and whose heads are garbed with what look like kufiyas. (Just as Palestinian women who fought as guerillas wore kufiyas.) I imagine this is actual newsreel footage, but I don't know. 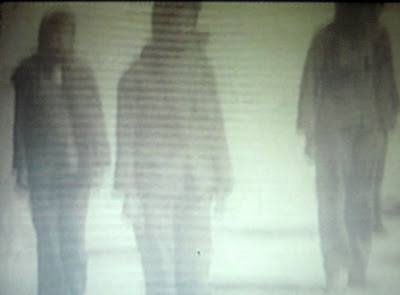 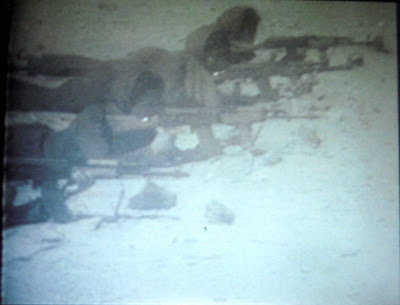 Born in Flames, then, is very useful for kufiyaspotters, as a kind of register of the ubiquity of kufiyas in progressive circles (including, significantly, African-American) in the US in the early '80s. It is also rather daring in its assertion of solidarity with Middle Eastern women (who at the same time happen to be "Africans" fighting against Moroccan colonialism.

Rent it from netflix.

(Additional fun fact: filmmaker Kathryn Bigelow plays one of the three female editors of the Socialist Youth newspaper, who eventually assert their solidarity with the Women's Army. Kathryn Bigelow directed two of my favorite movies, Near Dark--maybe the best vampire movie ever--and Blue Steel. And two I like a lot, Point Break and Strange Days. She's far superior to ex-husband James Cameron.)

I shot the photos myself...
Posted by Ted Swedenburg at 5:52 PM