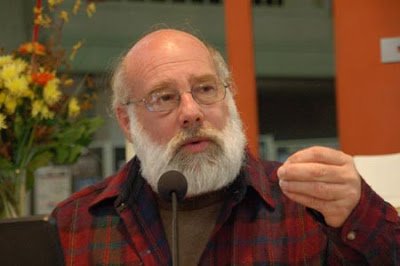 I just received this in the mail from the Israeli Committee Against House Demolitions. Their Director, Jeff Halper, participated in the recent, successful effort of the Free Gaza Movement to break the Israeli siege of Gaza, sending two boats in with supplies and a team of dedicated volunteers. Jeff was trained as an anthropologist, and participated in a panel at the American Anthropological Association meetings last fall, for which I served as a discussant. Please read Halper's very important observations on the trip, and on Israel and its relations with Gaza.

I've also been receiving communications from Fun'Da'Mental's Aki Nawaz, who also participated in the mission, and I'll be posting those soon.

Now, a few days after my release from jail in the wake of my trip to Gaza, I'm posting a few notes to sum things up.

First, the mission of the Free Gaza Movement to break the Israeli siege proved a success beyond all expectations. Our reaching and leaving has created a free and regular channel between Gaza and the outside world. It has done so because it has forced the Israeli government to make a clear policy declaration: that it is not occupying Gaza and therefore will not prevent the free movement of Palestinians in and out (at least by sea). ('s security concerns can easily be accommodated by instituting a technical system of checks similar to those of other ports.) Any attempt on the part of Israel to backtrack on this - by preventing ships in the future from entering or leaving Gaza with goods and passengers, including Palestinians - may be immediately interpreted as an assertion of control, and therefore of Occupation, opening Israel to accountability for war crimes before international law, something Israel tries to avoid at all costs. Gone is the obfuscation that has allowed to maintain its control of the without assuming any responsibility: from now on, is either an Occupying Power accountable for its actions and policies, or Palestinians have every right to enjoy their human right of travelling freely in and out of their country. can no longer have it both ways. Not only did our two little boats force the military and government to give way, then, they also changed fundamentally the status of 's control of .

When we finally arrived in Gaza after a day and a half sail, the welcome we received from 40,000 joyous Gazans was overwhelming and moving. People sought me out in particular, eager it seemed to speak Hebrew with an Israeli after years of closure. The message I received by people of all factions during my three days there was the same: How do we ("we" in the sense of all of us living in their country, not just Palestinians or Israelis) get out of this mess? Where are WE going? The discourse was not even political: what is the solution; one-state, two-state, etc etc. It was just common sense and straightforward, based on the assumption that we will all continue living in the same country and this stupid conflict, with its walls and siege and violence, is bad for everybody. Don't Israelis see that? people would ask me.

(The answer, unfortunately, is "no." To be honest, we Israeli Jews are the problem. The Palestinian years ago accepted our existence in the country as a people and are willing to accept ANY solution -- two states, one state, no state, whatever. It is us who want exclusivity over the "Land of Israel" who cannot conceive of a single country, who cannot accept the national presence of Palestinians (we talk about "Arabs" in our country), and who have eliminated by our settlements even the possibility of the two-state solution in which we take 80% of the land. So it's sad, truly sad, that our "enemies" want peace and co-existence (and tell me that in HEBREW) and we don't. Yeah, we Israeli Jews want "peace," but in the meantime what we have -- almost no attacks, a feeling of security, a "disappeared" Palestinian people, a booming economy, tourism and ever-improving international status -- seems just fine. If "peace" means giving up settlements, land and control, why do it? What's wrong with the status quo? If it's not broken, don't fix it.)

When in I also managed to see old friends, especially Eyad al-Sarraj of the Gaza Community Mental Health Program and Raji Sourani, Director of the for Human Rights, whom I visited in his office. I also received honorary Palestinian citizenship, including a passport, which was very meaningful to me as an Israeli Jew.

When I was in everyone in -- including the media who interviewed me - warned me to be careful, to watch out for my life. Aren't you scared? they asked. Well, the only time I felt genuine and palpable fear during the entire journey was when I got back to . I went from Gaza through the Erez checkpoint because I wanted to make the point that the siege is not only by sea. On the Israeli side I was immediately arrested, charged with violating a military order prohibiting Israelis from being in and jailed at the Shikma prison in . In my cell that night, someone recognized from the news. All night I was physically threatened by right-wing Israelis -- and I was sure I wouldn't make it till the morning. Ironically, there were three Palestinians in my cell who kind of protected me, so the danger was from Israelis, not Palestinians, in as well as in . (One Palestinian from was in jail for being illegally in ; I was in jail for being illegally in Palestine.) As it stands, I'm out on bail. The state will probably press charges in the next few weeks, and I could be jailed for two or so months. I now am a Palestinian in every sense of the word: On Monday I received my Palestinian citizenship, on Tuesday I was already in an Israeli jail.

Though the operation was a complete success, the siege will only be genuinely broken if we keep up the movement in and out of Gaza. The boats are scheduled to return in 2-4 weeks and I am now working on getting a boat-load of Israelis.

My only frustration with what was undoubtedly a successful operation was with the fact that Israelis just don't get it - and don't want to get it. The implications of our being the strong party and the fact that the Palestinians are the ones truly seeking peace are too threatening to their hegemony and self-perceived innocence. What I encountered in perhaps a dozen interviews - and what I read about myself and our trip written by "journalists" who never even attempted to speak to me or the others - was a collective image of Gaza, the Palestinians and our interminable conflict which could only be described as fantasy. Rather than enquire about my experiences, motives or views, my interviewers, especially on the mainstream radio, spent their time forcing upon me their slogans and uniformed prejudices, as if giving me a space to explain myself deal a death blow to their tightly-held conceptions.

Ben Dror Yemini of the popular Ma'ariv newspaper called us a "satanic cult." Another suggested that a prominent contributor to the Free Gaza Movement was a Palestinian-American who had been questioned by the FBI, as if that had to do with anything (the innuendo being we were supported, perhaps even manipulated or worse, by "terrorists"). Others were more explicit: Wasn't it true that we were giving Hamas a PR victory? Why was I siding with Palestinian fishermen-gun smugglers against my own country which sought only to protect its citizens? Some simply yelled at me, like an interviewer on Arutz 99. And when all else failed, my interlocutors could always fall back on good old cynicism: Peace is impossible. Jews and Arabs are different species. You can't trust "them." Or bald assertions: They just want to destroy us. Then there's the paternalism: Well, I guess it's good to have a few idealists like you around...

Nowhere in the many interviews was there a genuine curiosity about what I was doing or what life was like in Gaza. No one interested in a different perspective, especially if it challenged their cherished slogans. No one going beyond the old, tired slogans. Plenty of reference, though, to terrorism, Qassam missiles and Palestinian snubbing our valiant efforts to make peace; none whatsoever to occupation, house demolitions, siege, land expropriation or settlement expansion, not to mention the killing, imprisoning and impoverishment of their civilian population. As if we had nothing to do with the conflict, as if we were just living our normal, innocent lives and bad people decided to throw Qassam rockets. Above all, no sense of our responsibility, or any willingness to accept responsibility for the ongoing violence and conflict. Instead just a thoughtless, automatic appeal to an image of Gaza and "Arabs" (we don't generally use the term "Palestinians") that is diametrically opposed to what I've seen and experienced, a slavish repeating of mindless (and wrong) slogans which serve only to eliminate any possibility of truly grasping the situation. In short, a fantasy Gaza as perceived from within a bubble carefully constructed so as to deflect any uncomfortable reality.

The greatest insight this trip has given me is understanding why Israelis don't "get it:" a media comprised by people who should know better but who possess little critical ability and feel more comfortable inside a box created by self-serving politicians than in trying to do something far more creative: understanding what in the hell is going on here.

Still, I formulated clearly my messages to my fellow Israelis, and that constitutes the main content of my interviews and talks:

(2) The Palestinians are not our enemies. In fact, I urge my fellow Israeli Jews to disassociate from the dead-end politics of our failed political leaders by declaring, in concert with Israeli and Palestinian peace-makers: We refuse to be enemies. And

(3) As the infinitely stronger party in the conflict and the only Occupying Power, we Israelis must accept responsibility for our failed and oppressive policies. Only we can end the conflict.

Let me end by expressing my appreciation to the organizers of this initiative - Paul Larudee and Greta Berlin from the US, Hilary Smith and Bella from the UK, Vaggelis Pissias, a Greek member of the team who provided crucial material and political input, and Jamal al-Khoudri, an independent member of the PLC from Gaza and head of the Popular Committee Against the Siege and others - plus the wonderful group of participants on the boats and the great communication team that stayed ashore. Special appreciation goes to ICAHD's own Angela Godfrey-Goldstein who played a crucial role in and Jerusalem in getting the word out. Not to forget our hosts in Gaza (whose names are on the Free Gaza website) and the tens of thousands of Gazans who welcomed us and shared their lives with us. May our peoples finally find the peace and justice they deserve in our common land.
Jeff Halper is the Director of the Israeli Committee Against House Demolitions (ICAHD). He can be reached at: jeff@icahd.org.
Posted by Ted Swedenburg at 8:32 AM

To think the US sold Israel tens of thousands of anti-marine missiles and they couldn't use even one of them on that ship of fools? What a waste.
When, by the way, will you be posting about Suzanne Tamim?