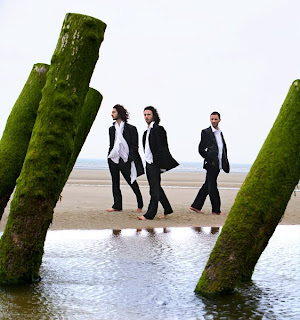 It's not often that the national media pays any attention to contemporary Palestinian music, so I was very pleased to hear Banning Eyre's favorable, and quite compelling, review of Le Trio Joubran's latest album, Majaz (مجاز), which was released last October. The review was broadcast yesterday (April 29) on All Things Considered. I've only listened to a couple of cuts on the album, but I can still highly recommend it. Don't just read the review on line, but also listen to it, since you get to hear the music. To hear more tracks from Majaz, go here, to emusic--which is doing a great job of making music from all over the world, including Palestine, readily available. Emusic also has the entire Sabreen catalog, as well as Tamaas, the solo release from the eldest of Le Trio Joubran, Samir.

(I reviewed the Joubrans' earlier album here.)
Posted by Ted Swedenburg at 11:23 PM

Hey Ted, if you're interested I can get you mp3s of the record (unless you want to buy it to support the artists). I wanted to write about it but had no time...