Thanks to a comment on an earlier post, I've been alerted to the latest Haifa controversy--in Bahrain, where MPs want her performance banned. An excerpt from the BBC report, dated April 30:

A raunchy Lebanese singer is causing controversy in Bahrain, where she is due to perform for the first time.

All but one of the members of the Gulf kingdom's Islamist-dominated parliament have approved a motion urging the government to ban Haifa Wehbe's show.

They objected on the grounds that the pop superstar's performance would be sexually provocative, violating Islamic conventions and Bahrain's traditions.

Organisers had earlier promised she would dress modestly during the show.

And just to remind hawgblawg readers what the MPs are objecting to: 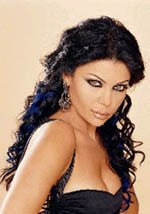 Sorry for the anonymous comment--it kept rejecting my log in.

Thanks for posting it.

All the Haifa drama is so cruel. Even Nancy, who has worked so hard to preserve her image deals with the same hate. It reminds me of something Ali Saleem said about pakistani media, but i think can be a bit applicable to arabic pop media in general.

"India makes its heroes - they know how to build them up and then cash in on them later. Aishwarya is world famous while we peg Meera down at every given opportunity. Who is our national hero after Quaid-e-Azam? Bhutto was a criminal according to the law of the land, Imran Khan has one skeleton after the other popping up ... We don't let individuals live nor institutions flourish." - Ali Saleem, Newsline, 2006

Thank you for your nice posting.
it is really helpful to us.
such a nice topics.