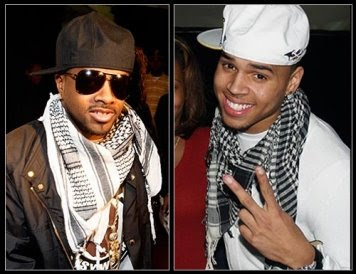 I've been asked to comment on the recent popularity of the kufiya in hip-hop circles, so I decided to hunt for more images and do more research. Of course, the kufiya in hip-hop is not "new" but dates back to the mid-to-late 80s, at least. Just as the kufiya has been around in political circles in the US since the early 70s, and in hipster circles since the mid-eighties.

Some claim that the latest upsurge in hip-hop kufiya wearing was incited by Jermaine Dupri (pictured on left), and given another jolt when Jay-Z showed up on the Letterman show wearing one (I've not found a photo of that one yet.) This may be the case, but Jermaine and Jigga were following trends and then taking them into more visible venues. They did not initiate hip-hop kufiya wearing. (On the right is Chris Brown.)

More to come!
Posted by Ted Swedenburg at 9:46 AM

Jay-Z's "bandanna" looks like a kufiyya but of the nonstandard Kanye West variety.
http://celeb.wohoo.co.uk/2007/10/jay-z-at-the-late-show-with-david-letterman/

This folks shold think before they where things...