I remember how blown away I was by Sabreen's album Maz'ooj, released in 2002. I particularly liked the songs which featured actor Mohammad Bakri's deep-bass spoken vocals (he is pictured on the bottom right on the album cover). And I also liked how the group incorporated, on a number of songs, a kind of hip-hop vibe. Listen, for instance, to the song "Wala‘" (Set Alight).

I had always thought that the album was so completely unique, that there was nothing like it.

And then I was listening again to Ziad al Rahbani's 1985 album Houdou Nisbi (which I picked up in Beirut in March), and noticed that Ziad's vocals on the song "Yellah Keshou Barra" are spoken as well, and Ziad's very clever, disco-ish, arrangement, as well as his deep, spoken vocals...remind me of Bakri on Maz'ooj. Listen to it here. 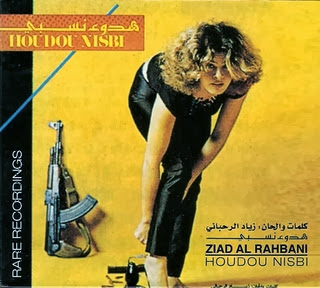 Could Ziad have been an influence on Sabreen when they recorded Maz'ooj?
Posted by Ted Swedenburg at 9:44 PM