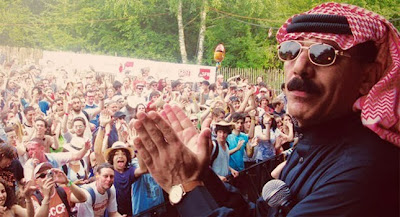 Syrian dabke singer Omar Souleyman has a new album out, Wenu Wenu, his first album produced specifically with a Western audience in mind. And he has been getting lots and lots of publicity.

In The Guardian. Where he says: "My music has no influences," and "I'm not into politics, I don't know any solution."

In Rolling Stone. Where Souleyman says "he's never felt pressure to join any political parties, or lend support to the government." And we learn that Syria dabke expert Shayna Silverstein

once went to a Souleyman show where a couple of concertgoers from Beirut, the cosmopolitan capital of Lebanon, crinkled their nose at the singer.

"They said, 'Oh, I don't understand why he is representing our culture. They should really invite Marcel Khalife'"...

The first calls Souleyman "[o]ne of the hottest stars of indie music," a quite remarkable designation, and one, the article underscores, which is quite unlikely. It goes on to say that, "Without a doubt, Omar Souleyman is the most popular Syrian wedding singer in the Western world. Beyond President Bashar al-Assad, he may be the next Syrian who an American music fan could name."

Souleyman calls attention to Syria's drastic water crisis, which played a major role in turning him into a musician: 'If the region hadn't fallen into a crippling drought, Souleyman might have remained a farmer. "It's a problem in the region," he says. "Even the wells have dried up and there are many issues with bringing water to people."'

On the paradox of Souleyman's success in the West: 'Zayid Al-Baghdadi, a criminal defense lawyer from Baghdad, says that neither he nor any of his Syrian friends had ever heard of Souleyman until he moved to Montreal. "When I first saw Omar perform here, I was just amazed by the cultural clash between him and the audience," he wrote via e-mail. "Here you have a middle-aged Arab man dressed in traditional bedouin clothing and a crowd of intoxicated, pot-smoking hipsters dancing frantically to his music. I think what has added to Omar's appeal in the West is the fact that his music has been slightly tweaked to better suit modern Western dance-music tastes."'

The other publicizes the release of the album and the video "Warni Warni," which really does kick ass.

Check out the two videos from the new release, "Warni Warni":


Both are great, but it may be that, as some observers claim, the sounds of the keyboards (which imitate the mijwiz, used in traditional dabke, may have been softened up to suit the Western ear.

Of course, Souleyman's arrival on the "indie" scene isn't brand new -- for instance, he played Glastonbury in 2011:

And Bonaroo the same year:


It also seems to be the case that Souleyman is not as apolitical as it seems. Check out this song he did in tribute to Syrian dictator, Bashar al-Asad.

Since it took me about 5 seconds to find this, you would imagine that at least one of the music journalists writing about Souleyman could have asked him about this song. I in no way want to trash Souleyman here for this recording, given that so many artists were forced to make such compromises (or felt they had to) in order to maintain their careers under Bashar's rule, but I do wonder why none of the journalists who have interviewed Souleyman bothered to do the research to find this, and ask the question.

The kind of "electronic dabke" produced by Souleyman is not unique to him alone, for there are a number of Syrians recording and performing in a similar vein. One who I particularly like is Saria al-Sawas, who I believe is better known in Syria and is more urbane than Souleyman. 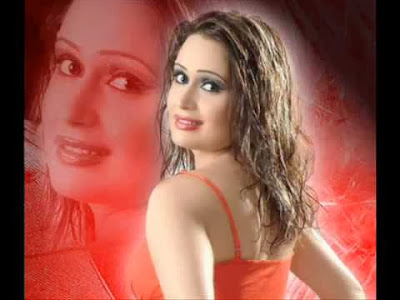 Check out this video of her performing "Hajar" for a wedding (the bread and butter for such musicians):

If you like this one, go look for some more vids. There are lots out there. And also lots more of Omar Souleyman.

I'd assumed, not understanding more than a couple of words of Arabic, that the Bashar song was ironic: "Bashar, darling of the people", seems a bit much to be song with a straight face. Is it not?

Since I posted this I was told by someone who has good contacts in Syria that this was regarded as a pro-Bashar song, and that Syrians still remember that Omar put it out. So, no, not ironic.

Oh, that's a shame. I guess your point about the difficulty of standing up to the pressure to sing songs like that holds though.

@AnonymousHoward:
Yes, Omar is a huge fan of the President as well as almost all of the south-western Houran plain; where he came from. This isn't a political song, though: it's just what people feel urged to do when there are plenty of sides to take to or choose from, and that's when they simply go back to whatever form of veneration they had before this farcical revolution hit Syria. I have here to stress the obvious fact that Omar Soul-lay-man (mind) has zero-percent political agendas, whatsoever. The people of Houran are interested in music, smoking, and kungfu-powerful red tea drinking and something there they drink called 'metteh; which is a stingent herb.
Oh, and yes... They copulate a lot.

@Ted:
Nice post. I heard the newly-released album by Omar, but there is one thing to point out, musicologically-spieling, about this particular song:
This is a remake of one of southern Syria's (and, northern Jordan's for that matter), best and most-danceable tunes 'Warda, Warda'. Omar's lyricists just took off a few words, and he mumbled the rest into sweet cacophonia. Remember, these tunes are all actually old debke ones, and people have been dancing to them since the late 1800's, so that's why they keep devolving and (in the case of this song), 'unvolving' them over and over again.
Still, the dancing blows are all there.

Thanks so much for the illuminating and generous comments, Hammer!

Nice article apart from the political comments. It's pretty obvious you don't know much about Syria and the Middle East (cannot understand one without knowing the other and the culture/history) so why even mention the subject is my question? Perhaps why you "wonder why none of the journalists who have interviewed Souleyman bothered to do the research to find this, and ask the question" is because you lack the decency they do (which isn't a question of intelligence btw, but more of a sign of respect/courtesy). Also, just to be clear, you didn't do any research, because if you did I wouldn't be here making light of this. All you did was regurgitate the libel and slander, divide and conquer politics, and toxicity, manifest in neo-liberal dogmatic propaganda subconsciously because you are too intellectually lazy and naïve to have a perception (or be open to the idea that a different POV exists) that isn't influenced by the mainstream media. So please, in the future, be aware that perpetuating ignorance -- conscious or not -- is not only hurtful but deadly, too. Also, I surmise what you consider "research" is fundamentally flawed and would recommend becoming better acquainted with the process. Unfortunately you are not alone in matters concerning these topics (Assad, Syria, the Middle East) but my hope is that it can change and by leaving this comment I hope I can say I at least somehow contributed to that and that I tried. Will leave you with the popular Arabic proverb: "If speech is silver, then silence is golden." All the best.

ps: Please publish this article so the message can live on. Don't let ego get in the way of truth, in the way of peace, of lives. Making mistakes is what makes us human. Learning from our mistakes is progress. Progression is evolving.

Dear 'Anonymous' -- If you had done some research on me via Google or even looked a bit at the blog I venture it would be hard for you to say I know very little about Syria and the Middle East. Souleyman did a pro-Asad song, journalists claim he isn't political...journalists do research and ask tough questions of the people they interview all the time, it's their job. I am a fan of Souleyman and also fully understand why he might have done a pro-Bashar song. It would be interesting to hear him explain why he did it, but I will never get to ask him. Cheers.