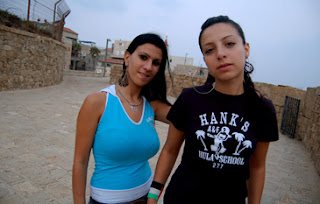 I forgot to mention it previously, but Jackie Reece Salloum's much anticipated documentary on Palestinian rap, Slingshot Hip Hop, had its premiere at the Sundance Film Festival this week. It is receiving, well, pretty good reviews. Justin Chang had this to say about it in Variety (January 21): "Lively but roughly structured docu could've benefited from more performance footage, focusing instead on the challenges these young talents (hailing from Israel, the West Bank and Gaza) have faced on their rise to prominence, especially the geopolitical barriers that have hindered their mobility. Music-themed fests and Mideast programmers should make room on their playlists." Less positive was Eric D. Snider writing in Cinematical: "What the film lacks, though, is a cohesive theme or story line. An introduction to the Arab rap movement is all well and good, but it's not enough – an introduction is only the first part of a story, after all." In any case, I'm still eagerly looking forward to seeing the film for myself. 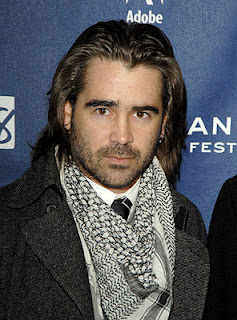 Meanwhile, thanks to Linda, who had to pour obsessively through dozens of photos to find it, we have another kufiyaspotting of Colin Farrell, who was photographed several times sporting the "Palestinian scarf" at the Sundance event for his film In Bruges. 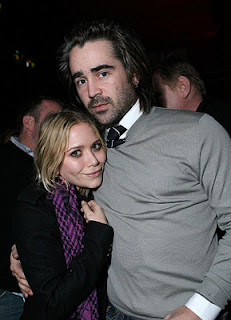 Colin Farrell has been spotted before. But what was also of note was the fact that Mary Kate Olsen showed up at the In Bruges party also sporting a kufiya--one of those fancy purple ones. (If you want to be as obsessive as Linda and I, and see even more photos of Colin and Mary Kate in kufiyas, go here, check out the "events" photos, and then you've got to get to photo 146, and after.)

Celebrity Gossip wrote that she was looking stylish as always, but failed (as the fashion and gossip experts usually do) to identify the kufiya, simply calling it a "purple scarf." 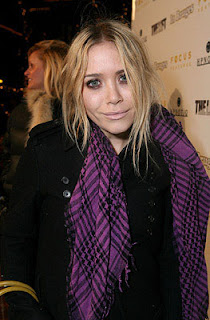 Who next? After Mary Kate Olsen, it really could be almost anyone. According to Celebrity Gossip, "With the writers’ strike raging on, the Hollywood elite are growing bored. But there’s nothing like the Sundance Film Festival to give stars like Mary-Kate Olsen something to do." Get bored and wear kufiyas...

Posted by Ted Swedenburg at 9:29 AM

The Bedouin Project said...
This comment has been removed by the author.
1:06 PM

Something to add to your amazing archiving of Palestinian Hip Hop and its friends AND kuffiyaspotting at the same time...

Check out Invincible's new album as soon as it comes out (you remember her from Free the P), and check out the free downloadable single and promo video here:


Invincible's an amazing activist and performer...she just recently tore it up for NYC's Israeli Apartheid Week show "Pick up the Mic; Break Down the Walls" along with Sabreena Da Witch (Abeer) from Lyd, Rebel Diaz, and more! She's also a member of Detroit Summer and the U.S.-Palestine Youth Solidarity Network, doing hip hop workshops with youth in Detroit and Palestine!

As if that wasn't enough...she wrote a great blog entry on performing wearing a kuffiyah in Leipzeig.

You can see it on her myspace blog:
http://www.myspace.com/invincilana

Yikes! That Olsen twin looks like a 50-year old who's lead a rough life.