What about Israel's poisoning of Khaled Mashaal? 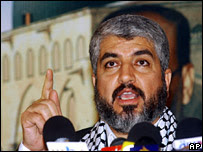 Kelley reminded me today that all the media discussion about Russian security forces' probable poisoning of Russian dissident Alexander Litvinenko in London never mentions the Israeli Mossad's poisoning of Hamas leader Khaled Meshaal, in Amman in September 1997. The Israeli Mossad agents were captured in Amman, and King Hussein called President Clinton to tell him that the Israelis would be executed if Israel did not supply the antidote. Clinton called Israeli PM Bib Netanyahu, and a Mossad agent administered the antidote, and Meshaal survived.

Meshaal was eventually expelled from Jordan and now resides in Damascus. He has been the leader of Hamas since the assassination of Sheikh Ahmed Yassin in March 2004. After Hamas' victory in Palestinian elections in January 2006, Meshaal declared that Hamas was ready to negotiate a "just peace" with Israel, but since the abduction of an Israeli soldier in June, he appears to advocate a harder line vis-à-vis Israel than PM Haniyeh.

As usual, the US media is simply not allowed to bring such parallels up.