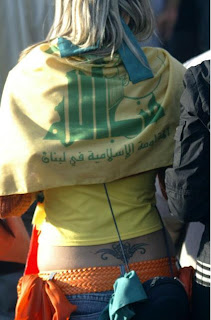 Presumably, at the ongoing sit-in in downtown Beirut, at Le Grand Serail, against the Fuad Sinyorah government. (And I'm guessing: that this woman is a Maronite, an Aoun backer, who is showing solidarity with Hizbollah by wearing the Hizbollah flag. Or is she a cousin of Haifa?) Courtesy Remarkz.

Addendum: a Lebanese friend of mine adds the important note that this is not an unusual sight in Beirut, as many, many Beiruti young women have tattoos. In addition, the young woman pictured is probably not Haifa's cousin, as the orange belt indicates she is a supporter of Michel Aoun's Free Patriotic Movement. (I'm learning, slowly, to read the semiotics of Lebanese clothing...)

With jeans that low, I doubt she'll be doing much sitting.