By Jonathan Cook, via Richard Falk, on the "unfolding tragedy of Gaza."

Drones are increasingly being used for surveillance and extra-judicial execution in parts of the Middle East, especially by the US, but in nowhere more than Gaza has the drone become a permanent fixture of life. More than 1.7 million Palestinians, confined by Israel to a small territory in one of the most densely populated areas in the world, are subject to near continual surveillance and intermittent death raining down from the sky.

There is little hope of escaping the zenana – an Arabic word referring to a wife’s relentless nagging that Gazans have adopted to describe the drone’s oppressive noise and their feelings about it. According to statistics compiled by human rights groups in Gaza, civilians are the chief casualties of what Israel refers to as “surgical” strikes from drones. 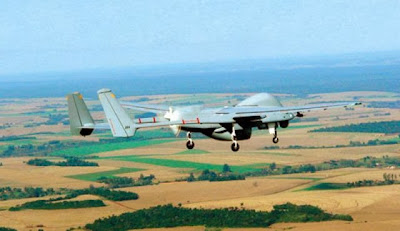 An earlier post on Israeli drones over Gaza and surfing as a way to avoid them stated that "zanana" translated as mosquito.

Ha'aretz wrote in 2010 that Gazans "have begun using the slang word zanana to also refer to those Gazans who report to the Hamas authorities what people say and do, with whom they meet, who visits them, and whose brother has gone to Ramallah."

The Washington Post in 2011 wrote this: "Roughly translated, zenana means buzz. But in neighboring Egypt, a source of Gaza custom and culture, the term is slang used to describe a relentlessly nagging wife."

I guess it could be all those things. And deadly. Zzzzzzzzzzzzzzzz.
Posted by Ted Swedenburg at 9:27 AM

Indeed. zan means, 'to make noise; produce a din-like, ‘drone’ sound. Now, that is a clever (but, obvious), wordplay using two meanings for the same object (Namely, that of an unmanned drone robot plane, and a nagging person).

In Egypt, zan (onomatopoeic noun), or a more-stressed verb-use zen means, 'to talk repetitively, trying to instill or convince someone of an idea'; 'to nag with drone-like talk', and finally 'to tirelessly try to get information from somebody by repetitive queries'.

The full phrase used in Egypt and parts of Gaza is as follows: الزن على الودان; which means again, 'to insistently talk to one's ear/s', and from it came the noun 'zanan' (male-specific), 'zanana' (female-specific), and some consider it a type of sorcery, or incantatory magic.

Asking a friend tonight about the origins of the term in the region, he affirmed to me that it was in Lebanon that the term zanana was first coined, around 2006-2007.

and a delayed thanks and alf shukran to Hammer