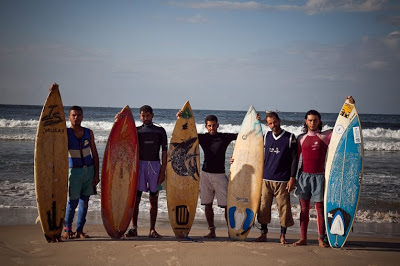 Only a few miles offshore, Israeli patrol boats run up and down the coast, preventing boats from venturing more than a few miles out to sea. Watch the sky long enough and you’ll spot the occasional Israeli Air Force drone, called Zanana (“mosquito” in Arabic, because of the buzz that they omit). Still, the beach is probably the safest place in Gaza—as far away as possible from the border areas where most of the fighting takes place. As it turns out, the main threats to Gaza’s surfers have come not from the conflict that characterizes the region, but from inside Gaza, from greedy hands looking to benefit from this new and exciting sport.

Most assume that the Hamas government in Gaza would pose the greatest obstacle to the cultivation of this “Western” sport. In reality, the Hamas government has been mostly cooperative in allowing the development of surfing and the local surfing community. Instead, the challenges facing the surfers have come from local, well-connected “charitable organizations” that see dollar signs in this media-friendly sport and try to demand exclusive control over surf equipment, hoping to dictate when and where people can surf.
Posted by Ted Swedenburg at 11:42 PM