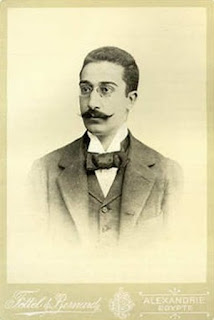 It is often, in fact one should say, nearly always, claimed that the celebrated Greek Alexandrian poet Constantine Cavafy (1863-1933), lived his life in almost complete isolation from Egyptian Arabs. Hala Halim, in her unpublished dissertation, The Alexandria Archive: An Archaeology of Alexandrian Cosmopolitanism (UCLA, 2004), suggests that the reality is somewhat more complicated. She suggests that his work is in some ways Orientalist, but that his Orientalism "both could be qualified and undercut by a disaporic affiliation that goes beyond binaries and makes for a more cosmoplitan attunement to otherness and other textualities" (107-108).

One of the pieces of writing that she cites in evidence is this poem, written in response to the notorious Denshawai affair.

When the Christians brought him to be hanged,
the innocent boy of seventeen,
his mother, who there beside the scaffold
had dragged herself and lay beaten on the ground
beneath the midday sun, the savage sun,
now would moan, and howl like a wolf, a beast,
and then the martyr, overcome, would keen
“Seventeen years only you lived with me, my child.”
And when they took him up the scaffold’s steps
and passed the rope around him and strangled him,
the innocent boy, seventeen years old,
and piteously it hung inside the void,
with the spasms of black agony–
The youthful body, beautifully wrought–
His mother, martyr, wallowed on the ground
and now she keened no more about his years:
“Seventeen days only,” she keened,
“seventeen days only I had joy of you, my child.”

You can read the full story of Denshawai here, which involved a dispute that broke out when British soldiers shot some pigeons owned by Denshawai villagers. Villagers were angered, attacked the soldiers, the British opened fire on villagers, wounding five, one of the villagers hit an officer with the stick. An officer who escaped died of heatstroke.

The British responded by rounding up 52 villagers, conducted a summary trial, and sentenced five to hanging and 27 others to various terms of hard labor and flogging. The hangings were carried out quickly, only two weeks after the "incident." The effect was to inflame nationalist sentiment in Egypt.

My source for the poem is here.

A couple other remarks:

The family name of Cavafy is of Turkish origin; it comes from the word ayakkabici or "shoe seller."

More evidence of the tolerant character of Alexandrian cosmopolitanism.
Posted by Ted Swedenburg at 6:52 PM