At least in Tel Aviv.

"Palestinian tartare"..."Arabic ravioli"..."At Jaffa/Tel Aviv, the new restaurant by chef Haim Cohen, the godfather of Israeli cuisine, knafeh is one of the most popular dishes on the menu." 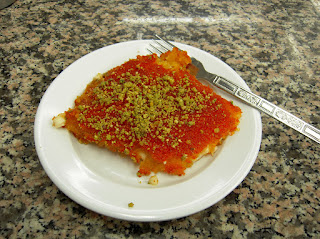 The acceptance and celebration of Palestinian food in current Israeli cuisine marks the peak of a long and gradual process, just as the identity of Israeli cuisine has started to reveal itself. When we think about what current Israeli cuisine is, a mix comes to mind: Jewish ethnic foods, excellent produce, young chefs with high culinary education and strong Arabic influences. Arguably, as the Israeli scene has become more established, it is able to credit its sources of inspiration.

Another explanation for the rising popularity of this food is strictly political. This trend is limited to the city of Tel Aviv and its surroundings. “In Tel Aviv it’s considered ‘cool’ to be pro-Palestinian,” said Gil Hovav, a leading culinary journalist and television personality. “The culture encourages it.” In the past few years, Tel Aviv has shifted further left on the political map, positioning itself as the liberal refuge and natural habitat for Israel’s young creative community. Raising the banner of pluralism, the residents of Tel Aviv express their discontent with the government agenda not only with social activism, but also in their food culture.
Posted by Ted Swedenburg at 9:07 PM