Music of the Egyptian Revolution

It's been pouring out, released in a fury of creativity set off by the astonishing events in Egypt over the last 16 days. Tahrir Square itself is one center. Check out this amazing video, of a singer and guitar (not shown), singing some of the key slogans of the uprising, with the crowd chanting and singing along. [Added February 12: I've learned his name: Ramey Essaam.] What is remarkable and rather surprising is that the song resembles "unplugged" grunge. This particular video helpfully translates the lyrics into English. But it makes a mistake in the beginning. Re: Mubarak, it should read: "We want to make Hosni Mubarak hear our voices!"
The original video (here) has gone viral. 545,932 views as of this writing.
Numerous accounts suggest that this is typical of what is going on at Tahrir Square on a daily basis. A group of people gathered around a singer (injured in the fights against the security forces or the pro-Mubarak thugs in earlier days) and an 'ud player, singing along with a tune that they have just learned from these two men, "Expel Hosni Mubarak." The men resemble roaming troubadors. These lyrics are translated as well.

And chants are song throughout the day and night. Here are some comic ones (which someone will hopefully at some future moment translate).

The last of the Tahrir songs is this one. Accompanying himself on guitar, the singer sings a comic song about a donkey refusing to step down for a younger one--an allegory about the old man Mubarak.

One more thing to add is that, according to Angry Arab, it is the songs of Abdel Halim Hafez that are played most often over the soundsystems on Tahrir. My friend Gamal Eid has also remarked that one hears the songs of Egypt's most beloved and important revolutionary singer, Sheikh Imam, on Tahrir.

Then there are the solidarity songs from "outside." One of the most impressive is Mohamed Mounir's "Azzay? (Why?)." Mounir, an Egyptian Nubian, has been a huge star, of music, cinema and theater, since the mid-1970s. Clearly this song was recorded prior to the outbreak of the uprising, but the video is full of scenes of the revolt, and the lyrics, ostensibly those of a love song, can also be read as a kind of allegory about Egypt and its conditions. The song is slamming, the video very moving. The video opens with the words: To every Egyptian citizen who participated in January 25...or who didn't participate. (There's a rough translation to the song in the comments.)

"Back Down Mubarak!" is a very lively, upbeat and oldschool sounding rap from Master Mimz, a Moroccan woman rapper, born in Casablanca, now based in England. The video features many shots of women who have participated in the protests.

There is also this rap, "#Jan25 Egypt," from Freeway, The Narcicyst, Omar Offendum, HBO Def Poet Amir Sulaiman, and Canadian R&B vocalist Ayah. Freeway's rap in particular is very compelling, at about 2:50.

In a quite different vein is this very beautiful chant from the Kuwaiti munshid, "Egypt Prayers." There is a rough translation into English in the comments.

There is "Long Live Egypt," by Scarabeuz and Omima. Scarabeuz's dad is Egyptian, his mother Dutch, and he was born in Berlin, where he is still based.

I at first thought the song was a little too sentimental and shlocky, but I came to like it more after listening to it all the way through. The images are quite moving, and the auto-tuned effects are endearing.

Finally, there's the free release, the Khalas Mixtape Vol. 1: Mish Ba'eed. With songs from rappers based in Tunisia, Algeria, Egypt and Libya. I particularly like the tracks from Tunisia's El Génèral and Algeria's Lutfi Double Kanon. Download it here. 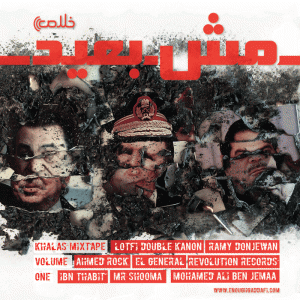 The White House better be planning the course of action for after their anointed strongman crushes the protesters in a bloody way. It’s unfortunately sounding more and more like Suleiman is planning just that now that it’s become clear the protests aren’t burning themselves out.