Maybe 'attacks' isn't the right word. Maybe 'snide satire.' However you want to characterize it, hipsters continue to be the object of ridicule and fun-poking. No one ever seems to get tired of it. I guess 'they' are an easy target, because, apparently, no one ever seems to want to claim to actually be a hipster. And the kufiya continues to be one of the stereotypical signs of the supposedly absurd, poseur hipster. A quintessential sign of "fakery," which for the critics, is what hipsterism is all about.

Here are a couple recent examples. Note--although the point is dead obvious--that the targets in both cases are women.

Thanks to Katie for this one. This is Ms. 2005, the fauxhemian, from Paste Magazine's feature on "The Evolution of the Hipster, 2000-09," in its November '09 issue. This is one of those "decade retrospectives" that we've seen and heard everywhere over the past few weeks. The caption reads:

She suffers for fashion, wearing a furry hat, boots and keffiyah even during the warmest months. Her new wrist tattoo is the Japanese symbol for beauty—or at least that’s what the guy at the tat shop told her. 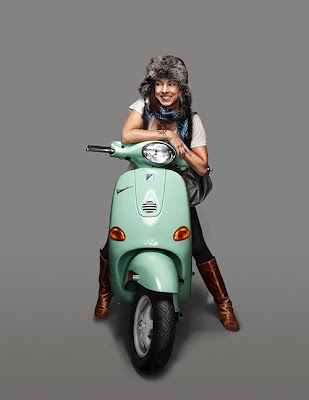 The description of this scenester is also rather more elaborate. Notice, once again, the use of the term, fauxhemian. All emphases are mine.

Looking something like a mix of Pocahontas and a tornado at a thrift store, the Apple Store Indie is your typical #fauxhemian. Masking her love for Steve Jobs products with whatever your blind grandma wore 40 years ago, she blends in seamlessly with the rest of her contemporaries at All Points West Festival.

Tweeting endlessly about nothing other than questions to a fake Ezra Koenig account, her main source of news is whatever happens to be a trending topic on twitter. Her iphone isn’t just a means to tell people what type of sandwich she is eating, she also uses it to cover Passion Pit’s “Sleepyhead” using only app store instruments with her hipster friends.

Getting musical recommendations from last.fm or whatever Jenny Eliscu and Jake Fogelnest play on satellite radio, her entire “scene” seems to only exist in digital format. The only physical music she owns are vinyl hand me downs that serve as decorative filler for her Ikea Billy bookshelf. She rarely if ever supports her local indie music scene unless it is someone spinning records (see: itunes playlist) at a scenester bar.

Unable to make sales of her diy junk through her etsy store, she has set up shop at a number of craft fairs across the tri state area. Unfortunately everyone else was selling the same trite octopus necklaces, owl earrings and onesies she slapped together. Upset with the lack of enthusiasm towards her creations, she will later blog about it to an audience of spambots.

Wow, not really funny, eh? I learned about this in a recent issue of Spin. For the life of me I can't understand why Spin was promoting yourscenesucks.com, but I'm glad they did, for the sake of my kufiyaspotting. 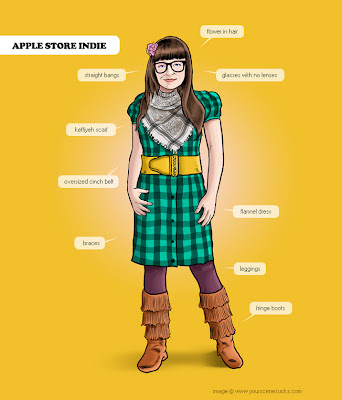